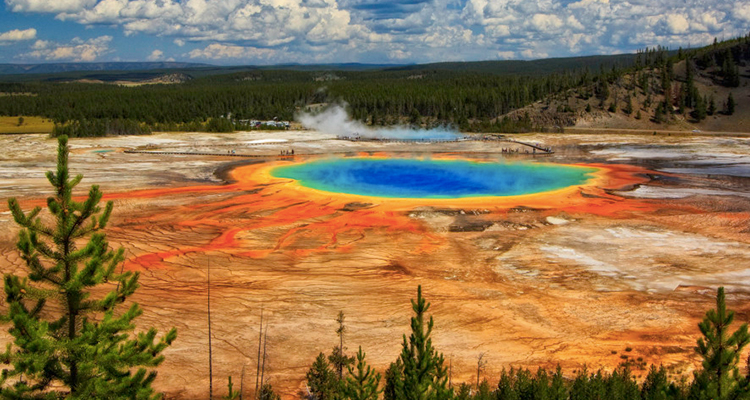 One of just a few supervolcanoes in the world, Yellowstone National Park has erupted just a few times in the Earth’s entire history. The park has many geysers such as this one which vent the perpetually-building, below-ground pressure.

Therefore the park is an American national park located mostly in Wyoming, with small sections in Montana and Idaho. It was established by the U.S. Congress and signed into law by President Ulysses S. Grant on March 1, 1872.

Yellowstone was the first national park in the U.S. and is also widely held to be the first national park in the world. The park is known for its wildlife and its many geothermal features, especially Old Faithful geyser, one of its most popular features. It has many types of ecosystem, but the subalpine forest is the most abundant. It is part of the South Central Rockies forests ecoregion. NASA’s view.

Native Americans have lived in the Yellowstone region for at least 11,000 years.Aside from visits by mountain men during the early-to-mid-19th century, organized exploration did not begin until the late 1860s. Management and control of the park originally fell under the jurisdiction of the Secretary of the Interior, the first being Columbus Delano. However, the U.S. Army was subsequently commissioned to oversee management of Yellowstone for a 30-year period between 1886 and 1916. In 1917, administration of the park was transferred to the National Park Service, which had been created the previous year. Hundreds of structures have been built and are protected for their architectural and historical significance, and researchers have examined more than a thousand archaeological sites. Therefore the park has many beautiful things to offer and show. The animals and the terrain go a long way and have one of the largest parks for them.