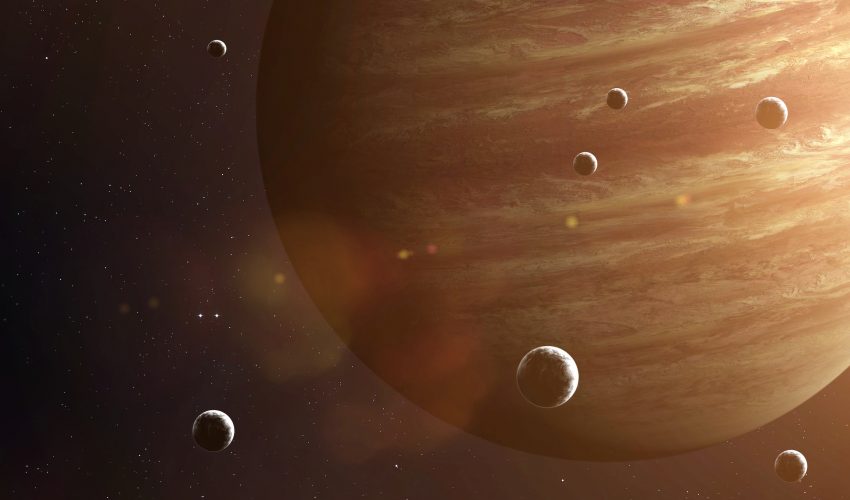 While investigating the possible existence of a massive planet Beyond Pluto, scientists discovered that Jupiter has 12 more moons than previously realized. While 11 of these moons found orbiting the planet are considered to be normal, there is one that the experts are calling an “oddball.”

The research team, led by Scott S. Sheppard of the Carnegie Institution for Science, first observed a giant object in our solar system in 2014, which is now referred to as Planet X or Planet Nine.

“Jupiter just happened to be in the sky near the search fields where we were looking for extremely distant Solar System objects, so we were serendipitously able to look for new moons around Jupiter while at the same time looking for planets at the fringes of our Solar System,” said Sheppard.

Gareth Williams at the International Astronomical Union’s Minor Planet Center explained: “It takes several observations to confirm an object actually orbits around Jupiter. So, the whole process took a year.”

Nine of the newly-discovered moons are part of a distant collection of moons that orbit in the opposite direction of Jupiter’s spin rotation. They are believed to have originated from larger bodies before colliding with asteroids, and take about two years to orbit the planet. 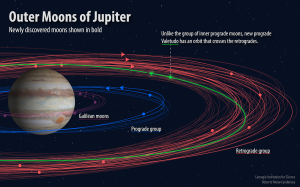 Two of the new moons have been found to orbit in the prograde, or same direction as the planet’s rotation, within a closer group of moons. Similar orbital distances and angles suggest that this pair may be fragments of a larger moon that was broken apart, and they circle the planet in just under a year.

“Our other discovery is a real oddball and has an orbit like no other known Jovian moon,” said Sheppard. “It’s also likely Jupiter’s smallest known moon, being less than one kilometer in diameter.”

This moon, which takes about one and a half years to orbit Jupiter, is more inclined to the prograde group of moons – yet has an orbit that crosses the outer retrograde moons. For this reason, the atypical moon is more prone to collisions with both prograde and retrograde moons.

“This is an unstable situation,” said Sheppard. “Head-on collisions would quickly break apart and grind the objects down to dust.”

The incredible findings of the study modify the total number of moons orbiting Jupiter to 79, which is the most of any planet in our Solar System.
—
By Chrissy Sexton, Earth.com Staff Writer