There could be a large amount of water on dwarf planet Ceres • Earth.com 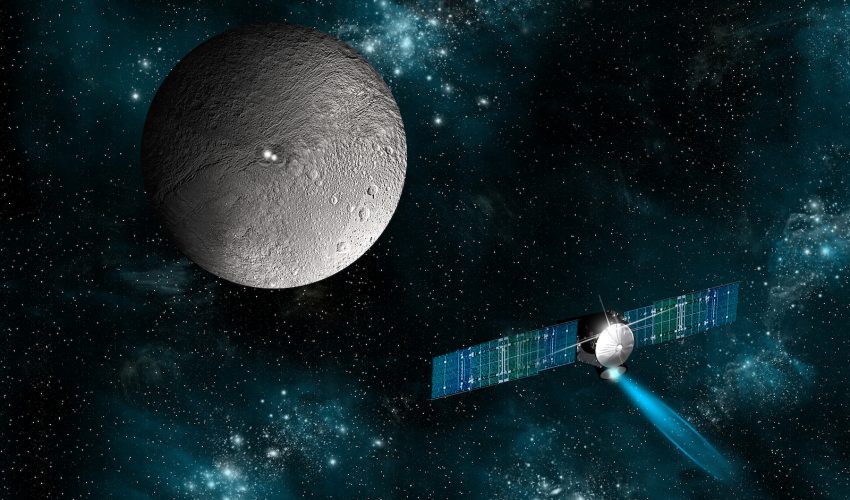 There may be an abundance of water on the dwarf planet Ceres, according to a new study published in the journal Science Advances.

Ceres is a rocky minor planet located between Mars and Jupiter that, according to recent findings, is still evolving and may hold the building blocks necessary for alien life.

Carbonates, typically an indicator of liquid water, have been observed and monitored on Ceres for quite some time.

When NASA’s Dawn probe launched in 2007, it approached Ceres and recorded images of bright spots in a crater on the surface. Since 2015, the Dawn probe has been mapping Ceres, and more and more bright spots were discovered.

Some of the bright spots, also called carbonate patches, have the same reflecting capabilities of dirty snow.

The presence of carbonate patches suggests that there is a large quantity of a brine, possibly even a subsurface ocean under Cere’s rocky, cratered surface.

Researchers from the Institute of Astrophysics and Space Planetology in Italy studied images of these bright spots taken with a visible, infrared mapping spectrometer in order to assess their chemical composition.

After analyzing the images and makeup of the icy patches around the craters on Ceres, the researchers found compelling evidence for liquid water.

What’s more, the dwarf planet is evolving as a slushy, brine solution is still making its way to the surface. This was evidenced by the presence of floor fractures at the bottom of some craters, which according to the researchers shows where water has been ejected.

The team found that carbonates were present all over the surface of Ceres, forming a uniform band across its entirety.

The recent processes are still ongoing, and findings suggest that they involve fluid water.

Future studies using data from the Dawn Mission could provide more insight into the internal makeup of Ceres and what drove/is driving the bright spots to form on the surface.