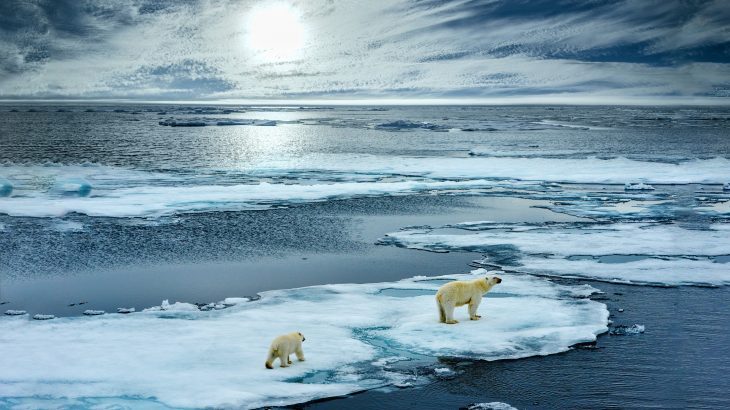 Abrupt changes in the climate system during the last ice age behaved like dominoes, with one event initiating a succession of events, according to a new study from the University of Copenhagen.

Considering that the extent of sea ice in the Arctic played an important part in the dramatic climate shifts, it is concerning that this part of the climate system may trigger abrupt and widespread climate change again in the future.

To predict how climate change will unfold, it is critical to understand the events of the past. For decades, scientists have tried to identify the causes and effects of major changes that took place during the last ice age.

At that time, temperatures in Greenland repeatedly rose by 5 to 16 degrees Celsius in a matter of decades in what is referred to as Dansgaard-Oeschger events.

“Many studies have tried to answer this long-standing question: Which part of the climate system changed first when these approximately 30 abrupt climate changes, called Dansgaard-Oeschger events, began?”

“Was it, for example, the ocean currents in the North Atlantic, the wind and rainfall patterns in the Northern Hemisphere, or the spread of sea ice in the Arctic that triggered climate change?” said study lead author Emilie Capron from the University of Copenhagen.

The new analysis reveals a surprising set of dynamics within the Dansgaard-Oeschger events. While the same physical processes behaved like a toppling set of dominoes, the order of the changes were not the same from one event to the other.

The study was focused on data from two Greenland ice cores. The researchers found that changes in different parts of the climate system, including ocean currents, sea ice extent, and wind patterns, were so closely intertwined that they likely triggered and reinforced each other. This would have caused the abrupt, reoccurring climate changes.

The results of the analysis were compared to climate model simulations of the last ice age developed by study co-author Guido Vettoretti. The model showed the same type of entangled behavior of sea ice, ocean currents, and wind and precipitation patterns.

The findings raise new concerns about ongoing rapid warming in the Arctic. The extent of sea ice cover in the North Atlantic was one of the climate dominoes that had the potential to disrupt the entire system during the ice age. Since the 1980s, the modern extent of sea ice has been in a state of decline.

“If you do not want the dominoes to topple over, you are better off not to push the table they stand on too much.”