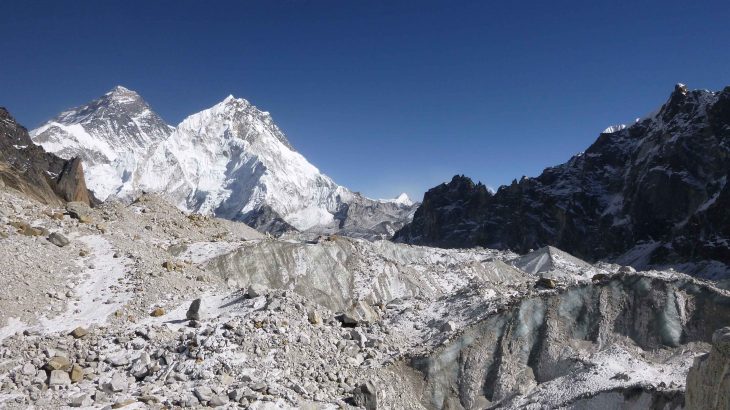 Since the start of the 21st century, the melting of the Himalayan glaciers has dramatically accelerated, losing about a vertical foot and a half of ice each year since 2000. This is double the amount of ice loss that occurred from 1975 to 2000.

Melting on this massive scale is an enormous threat to those downstream who rely on glacier melt-off for their water source.

“This is the clearest picture yet of how fast Himalayan glaciers are melting over this time interval, and why,” said lead author Joshua Maurer, a Ph.D. candidate at the Lamont-Doherty Earth Observatory at Columbia University. He added that the glaciers have lost about a quarter of their mass over the last four decades.

Up until this point, observations as to how much mass the glaciers have lost have been fragmented, contradictory, and ultimately, inconclusive.

However, this new set of data produced by Columbia’s Earth Institute, and published in Science Advances, has compiled decades-old information from satellites across India, China, Nepal, and Bhutan. Therefore, researchers are able to conclude that the melting of the Himalayan glaciers is consistent and climate change is the cause.

Maurer and his colleagues transformed satellite images of 650 glaciers into 3D models to depict the changing elevations and compare them to post-2000 optical data. This is where they saw the dramatic increase in melting which kicked off in 2000, where the glaciers lost about a half meter (20 inches) each year.

More recently, the glaciers have shed upwards of 8 billion tons of water, with most water-loss (up to 16 feet per year) being concentrated at lower elevations.

Although Maurer agrees with other researchers who believe that precipitation shifts and increase in fossil fuel-based soot contribute to the melting, after he and his team looked closely at compiled temperature data, he thinks that the overall temperature increase is really to blame.

Ultimately, the melting of the glaciers will lead to water shortages later down the road, and some communities may even be at risk for massive flooding as meltwater lakes continue to rise. Unless measures are taken to curb the effects of climate change, we can only expect the rapidness of the melting to continue to speed up.