What happened after the asteroid that killed the dinosaurs made impact? • Earth.com 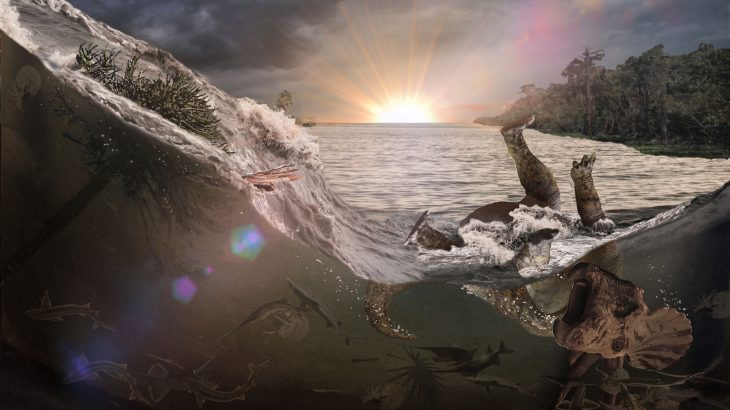 What happened after the asteroid that killed the dinosaurs made impact?

66 million years ago, a North Dakota floodplain nicknamed the Hell Creek Formation quickly transformed from an inland sea habitat teeming with prehistoric life to a mass killing field laid waste by raining glass, 30-foot waves, and piles of sediment and clay, marking the end of the Cretaceous Period.

It’s a one-of-a-kind dinosaur graveyard, and paleontologists have so far uncovered piles of fish fossils stacked on top of one another, charred tree trunks and branches, fossils of mammals, insects and even part of a Triceratops, as well as many other marine organisms.

Excavations of the Hell Creek Formation first started six years ago. Digging was led by Robert DePalma, who hypothesized that the area was home to a mass grave linked to the asteroid impact that triggered an extinction responsible for wiping out around 75 percent of all life on Earth.

This event is called the K-T Boundary, or K-Pg extinction, and after years of digging, the fossils discovered so far line up with DePalma’s suspicions.

“This is the first mass death assemblage of large organisms anyone has found associated with the K-T boundary,” said DePalma. “At no other K-T boundary section on Earth can you find such a collection consisting of a large number of species representing different ages of organisms and different stages of life, all of which died at the same time, on the same day.”

A new study published in the journal Proceedings of the National Academy of Sciences describes the site and its link to the asteroid that struck the Yucatan Peninsula 66 million years ago.

“It’s like a museum of the end of the Cretaceous in a layer a meter-and-a-half thick,” said Mark Richards, a co-author of the study and professor emeritus of earth and planetary science at UC Berkeley.

Once the asteroid made impact, asteroid dust and rock debris were sent into the atmosphere blanketing the world in a thick cloud.

From this cloud rained down tiny glass beads called tektites, pelting the land like birdshot at speeds of 100 to 200 miles per hour and possibly even setting fire to trees and plants.

The force of the impact of the asteroid also caused the inland sea to churn up massive waves until a wall of water 30 feet high crashed into the mouth of a river.

After this, hundreds of freshwater fish were stranded on a sandbar, and the river temporarily reversed course. Struggling on the sand, the fish were pelted by the glass beads, some so large that they buried the fish deep into the mud through the force of impact.

Not long after being buried by sediment, glass beads, and rocks from the atmosphere, a second wave destroyed everything in its path. 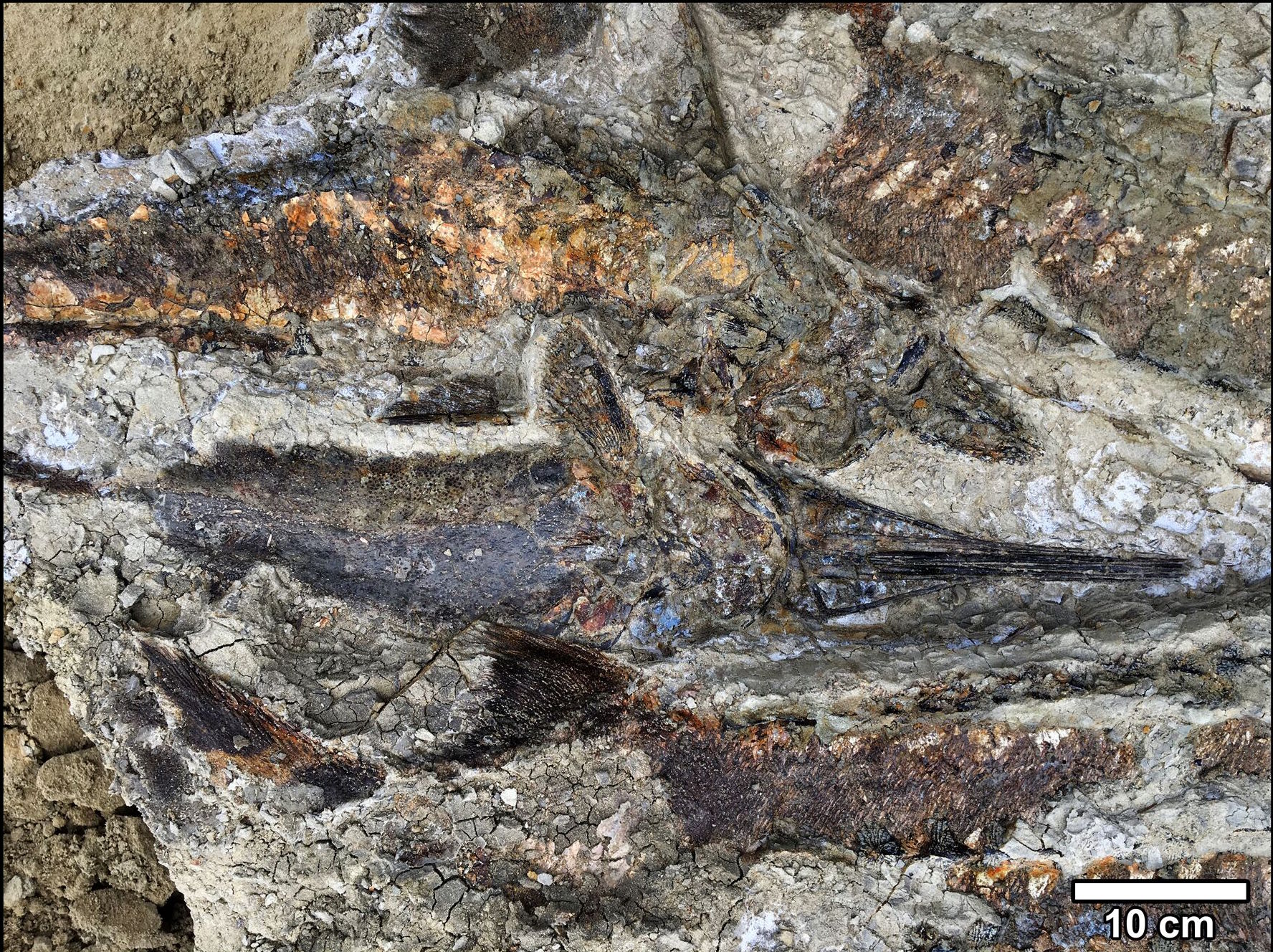 Fossilized fish piled one atop another, Image Credit: Robert DePalma

The researchers are sure that two waves caused the mass destruction at the site because one single wave does not explain how the fish became both stranded and then buried.

Two huge waves called seiches crashed ashore and covered everything in at least six feet of deposits and on top of this formed a layer of clay-rich iridium, a second key clue that this site is linked to the K-T Boundary.

Iridium is a rare metal on Earth but commonly found in asteroids and comets.

It would make sense that the Hells Creek site was sealed in by iridium because as the impact of the asteroid sent debris skyward, this debris slowly rained back down on Earth, and iridium was the last to fall from the atmosphere.

“We have an amazing array of discoveries which will prove in the future to be even more valuable,” said Jan Smit, an expert on tektites who helped DePalma study the fossils found at the site. “We have fantastic deposits that need to be studied from all different viewpoints. And I think we can unravel the sequence of incoming ejecta from the Chicxulub impact in great detail, which we would never have been able to do with all the other deposits around the Gulf of Mexico.”