What did ancient sharks feed on when there were few fish in the sea? • Earth.com 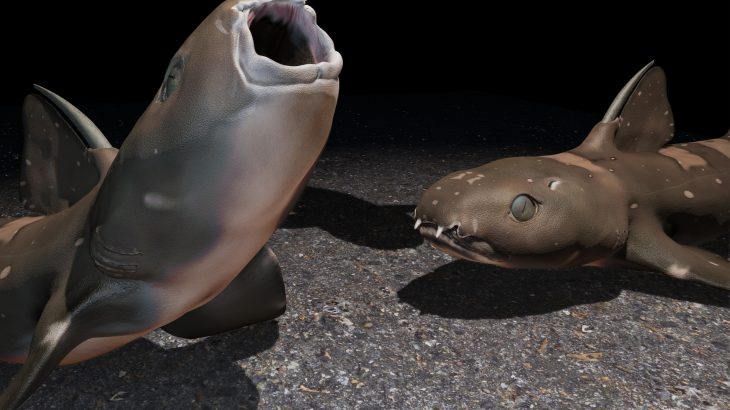 What did ancient sharks feed on when there were few fish in the sea?

Researchers from the University of Chicago used CT scans to analyze an ancient shark fossil for the first time in a new study.

The researchers found that the shark was capable of suction feeding, and the age of the fossil is 50 million years older than some of the earliest suction feeding bony fish ever discovered.

“Among today’s aquatic vertebrates, suction feeding is widespread, and is often cited as a key factor contributing to the spectacular evolutionary success of ray-finned fishes,” said Michael Coates, Ph.D., the senior author of the new study. “But here we show that high-performance aquatic suction feeding first appeared in one of the earliest known sharks.”

Shark fossils are few and far between since shark skeletons are made up of cartilage which rots before it can be fossilized.

Occasionally, shark teeth or fin spines will show up in the fossil record or researchers will discover a complete skeleton encased in rock.

With this study, the researchers worked with one such enclosed specimen. The fossil belonged to the species Tristychius arcuatus, which was first discovered in 1837.

The researchers used CT scanning to create 3D images of the fossilized cartilage within the rock which provided an inside look at the fossil without potentially damaging the specimen by breaking open the rock.

Modeling software was then used to show how the jaws of the fossil relate to modern fish. The researchers were able to model a complete skeleton of the fossil revealing important information about the ancient species.

“These new CT methods are releasing a motherlode of previously inaccessible data,” Coates said. “We realized that when we got all the parts out [virtually], we had the complete construction kit to rebuild our shark in 3D.”

Tristychius had jaws capable of suction feeding and was able to filter in water and food thanks to a set of cartileges that expanded and contracted to control suction. Its mouth was pushed forward like today’s nurse sharks.

This specialized feeding apparatus gave the species an edge over other toothier ancient sharks that roamed the ocean alongside Tristychius as suction feeding allowed the shark to feed on prey that its competitors could not.

“The combination of both physical and computational models has allowed us to explore the biomechanics in a Paleozoic shark in a way that’s never been done before,” Coates said. “Here we have the earliest evidence of this key innovation that’s been so important for multiple groups of fishes and has evolved repeatedly.”