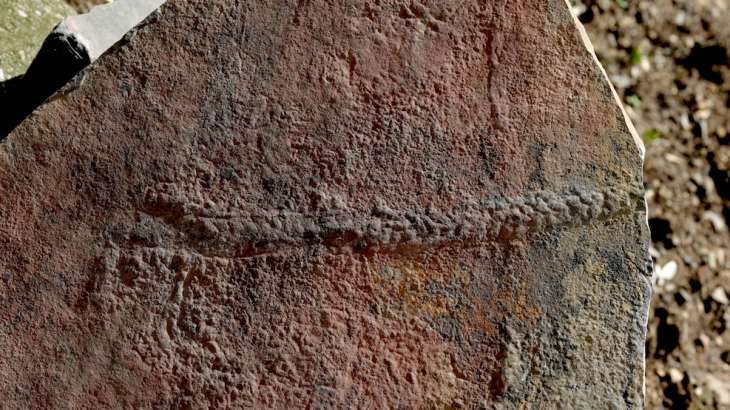 Scientists have discovered what may be one of the first trails made by animals on the Earth’s surface about 550 million years ago.

These ancient fossilized trails are some of the most convincing evidence to show that ancient animals had mobility about a half-billion years ago — before the dinosaur age and the Pangea supercontinent.

Both the trail and the fossilized creature who made it, dubbed Yilingia spiciformis (which translates to Yiling bug), were unearthed from multiple layers of rock near the city of Yiling in China.

They were discovered by Shuhai Xiao, a professor of geosciences with the Virginia Tech College of Science, and his colleagues from the Chinese Academy of Sciences’ Nanjing Institute of Geology and Paleontology.

“This discovery shows that segmented and mobile animals evolved by 550 million years ago,” Xiao said. “Mobility made it possible for animals to make an unmistakable footprint on Earth, both literally and metaphorically. Those are the kind of features you find in a group of animals called bilaterans. This group includes us humans and most animals. Animals and particularly humans are movers and shakers on Earth. Their ability to shape the face of the planet is ultimately tied to the origin of animal motility.”

Yilinia spiciformis was a millipede-like animal, about a quarter inch to an inch wide and about 4 inches long. It would move by dragging its body across the ocean floor, resting along the way, and thus leaving a trail as long as about 23 inches.

What’s more is that this discovery places the evolution of bilaterians (symmetric animals with segmented bodies and directional mobility) exactly where scientists estimated it to be — between 635 and 539 million years ago.

“We are the most impactful animal on Earth,” Xiao said. “We make a huge footprint, not only from locomotion, but in many other and more impactful activities related to our ability to move. When and how animal locomotion evolved defines an important geological and evolutionary context of anthropogenic impact on the surface of the Earth.”

This discovery is published in Nature.