The archer fish may be paving the way for underwater vehicles • Earth.com 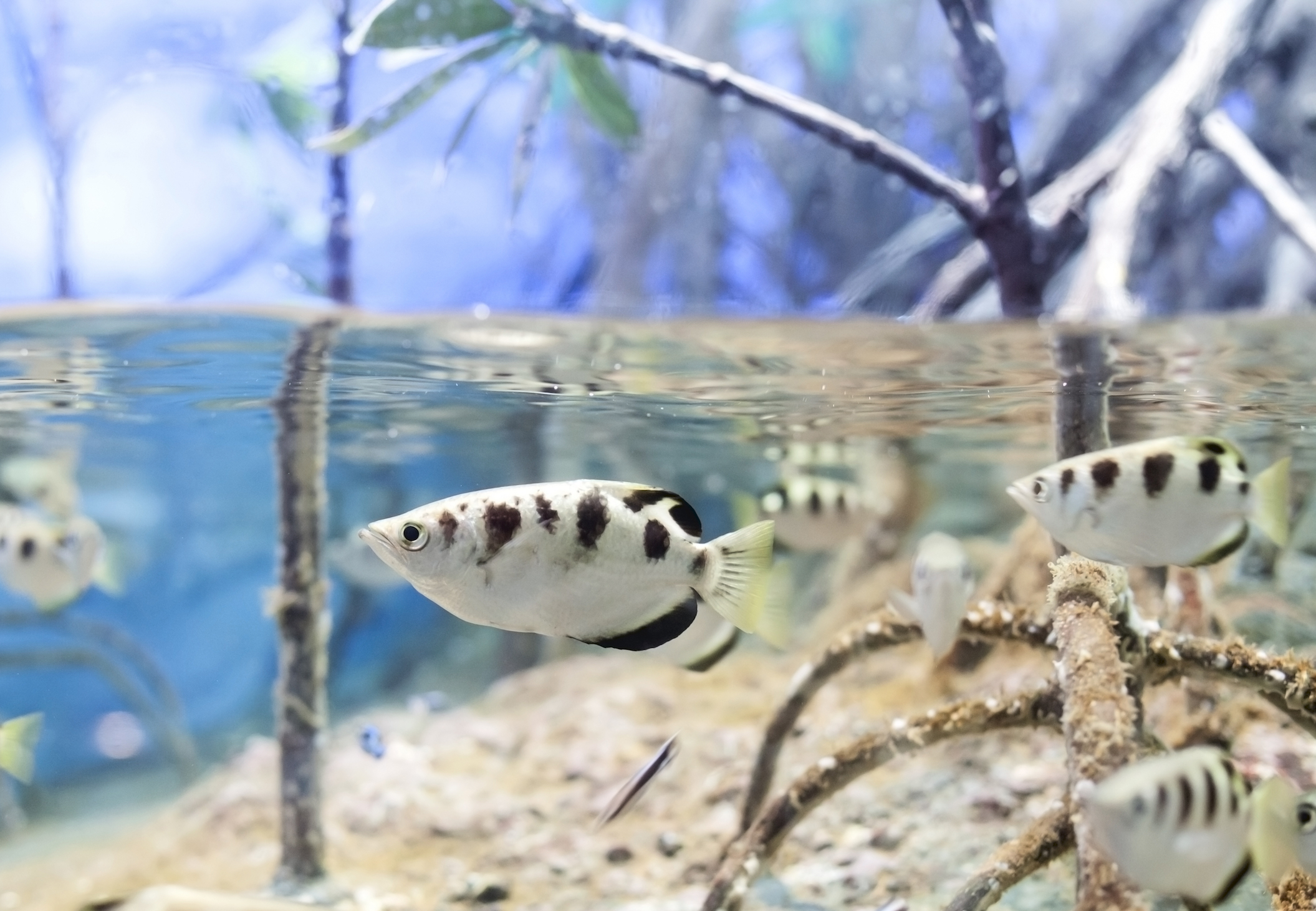 The archer fish may be paving the way for underwater vehicles

The archer fish – famous for its ability to shoot aqua darts at its land-based insect prey, knocking it into the water – also has another impressive hunting tactic: it can launch itself from a near standstill out of the water to a height over two times its body length.

Scientists have done plenty of work documenting the archer fish’s arrow-like spit-shooting, which is usually aimed at insects on overhanging leaves and causes them to fall into the water. But not much work has been done studying the way these fish will often catch their falling prey.

When an insect topples into the water, it’s fair game for any predatory fish in the vicinity. To keep other competitors hungry, archer fish will sometimes leap out of the water, catching their prey in midair and eliminating all competition.

Engineers at Massachusetts Institute of Technology have researched the hydrodynamics of this fish’s jumping behavior, publishing their results in the Journal of Experimental Biology. What piqued their interest was the ability of the archer fish to seemingly go from 0 to 60 almost instantaneously.

“Unlike, say, a shark that comes barreling up from the bottom to catch its prey, an archer fish’s initial momentum is zero,” explains Alexandra Techet, an associate professor of mechanical engineering at MIT. “All that force has to be created close to the surface, at a near standstill. That’s what makes this fish really interesting to study and completely different than your traditional leaping and jumping problem.”

In order to study this behavior, the research team housed 10 archer fish in a 55-gallon tank filled with brackish water – mimicking their typical habitat in the mangrove swamps and brackish river waters of Southeast Asia. Like training fun-sized dolphins, they taught the fish to jump by hanging freeze-dried shrimp above the surface of the water and temporarily removing the food if the fish tried to spit it down.

After a month of training, five of the ten fish were trained to consistently jump for their food. The remaining five were apparently slow-learners, or just really content with trying to shoot their food out of the air – the gunslingers of the archer fish community.

The team then began using a high-speed camera to record the jumping behavior of these fish. Going frame-by-frame, they were able to analyze the jumping movements of the fish through the direction and velocity of particles they placed within the water that glowed under infrared light. This analysis allowed them to identify three main phases in archer fish jumping behavior: hovering, thrust production, and gliding.

The first phase is the fish hovering just below the water’s surface, with its snout positioned at the surface so it can see any overhanging prey.

In the second phase, the fish begins to produce upward thrust by raising its pectoral and pelvic fins while moving its tail back and forth until it gains enough momentum to launch.

For the final phase, the archer fish glides through the air and up to the bait, no longer producing any thrust and simply navigating the air by changes in its posture.

The team also found that the number of tail movements each fish produced directly related to the height of the bait. So the higher the bait, the more times the fish would beat its tail. Co-author Leah Mendelson, a graduate student at MIT, expressed her surprise at the fish’s ability to generate so much power in such a limited space: “How do you accelerate when the most critical thing that’s in scarce supply is the space you have to do it in? There’s no running start. And to me that’s one of the biggest takeaways.”

With this frame-by-frame breakdown, the researchers found that the maximum velocities reached by each fish ranged from 0.6 to 1.7 meters per second squared. They also determined that archer fish are able to launch themselves out of the water at heights as great as 2.5 times their body length.

“The speed they leave the water with is on the order of Olympic swimmer speeds,” says Mendelson. “The record for the 100-meter freestyle is a little under 50 seconds, so, 2 meters per second. So these fish are almost as fast as an Olympic swimmer, but actually going up rather than horizontal.”

The next step for these engineers is to study the archer fish’s jumping behavior from a three-dimensional perspective. This will help determine what other fins play a role in propelling the fish out of water.

Techet believes that further research could lead to analysis that helps guide the design of surfacing underwater vehicles – after all, nature has had millennia to perfect this species’ design.

“Am I going to make a flapping robot that jumps out of the water?” asks Techet. “Probably not. But the concepts here are ubiquitous between fish, propulsors, and foils in general.” Flying fish robots aside, studies such as this will only help to further our understanding of biology and engineering, and could possibly lead to some interesting mechanical designs in the future.