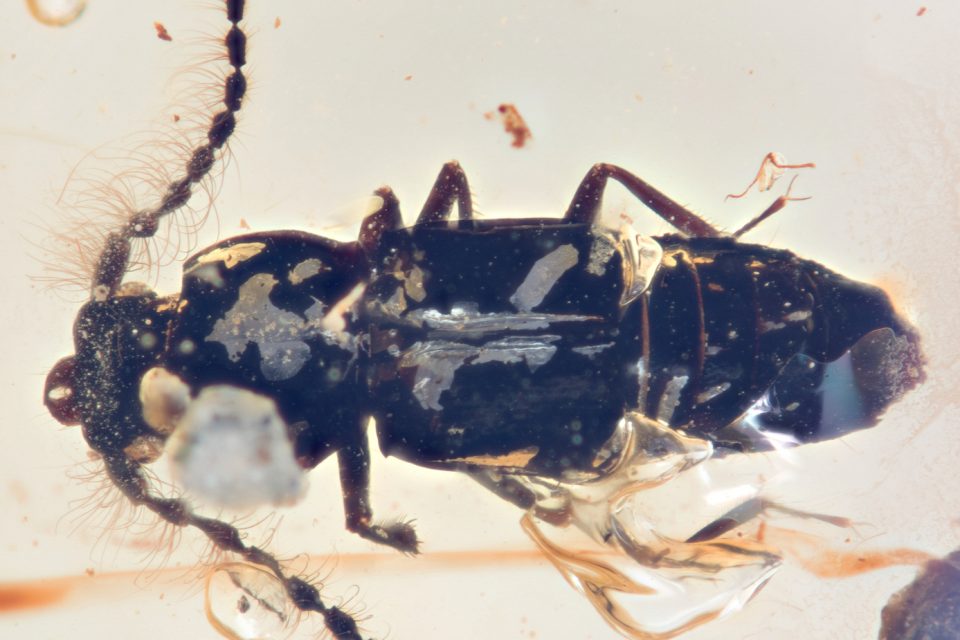 A 99-million-year-old insect preserved inside of a piece of amber is giving scientists new clues about how Earth’s landmasses were arranged millions of years ago. In 2016, Shuhei Yamamoto studied the creature trapped inside of a penny-sized piece of Burmese amber from Hukawng Valley in northern Myanmar, and discovered that it was a new species.

Yamamoto is a researcher at the Field Museum and the lead author of a paper describing the new species. He explained that the fossil beetle is a rare find because it is one of the oldest known members of its family. Based on the fact that it is an ancient relative of the flat rove beetles in the Piestus genus, the species was named Propiestus archaicus.

Living alongside the dinosaurs during the Late Cretaceous era, Propiestus had a flattened body, a long antenna, and short legs. It could be found beneath the bark of rotting trees – an environment similar to that of today’s flat rove beetles.

“The antennae probably had a highly sensitive ability as a sensory organ,” said Yamamoto.

Smaller hair-like structures attached perpendicular to the antennae would have increased the beetle’s ability to feel out its surroundings. “There wouldn’t have been a lot of space available in the beetle’s habitat, so it was important to be able to detect everything.”

The flat rove beetle cousins of Propiestus that are alive today are found mostly in South America, with the exception of one species in Southern Arizona. Propiestus was found in Myanmar, which is literally on the other side of the globe from the Americas, but this has not always been the case.

Millions of years ago, Myanmar and South America were quite close to each other as part of the megacontinent Gondwanaland, which formed when the earlier megacontinent Pangea broke apart. Eventually, Gondwanaland broke apart as well, which is when the continents began to form as we  recognize them today.

Scientists have a clear understanding of which of today’s continents made up Gondwanaland and which made up its sister continent, Laurasia. However, the detailed timing and pattern of the Gondwanaland split is not yet clear.

“Like koalas and kangaroos today, certain animals that we think lived in Gondwanaland are only found in one part of the world,” said Yamamoto. “Although Propiestus went extinct long ago, our finding probably shows some amazing connections between Southern Hemisphere and Myanmar. Our finding fits well with the hypothesis that, unlike today, Myanmar was once located in the Southern Hemisphere.”

Many inclusions in Burmese amber that have been researched in the last 15 years, including Propiestus, have traits in common with insects from Gondwanaland. By studying these tiny creatures trapped in amber, experts can begin to answer questions about the structure of the Earth millions of years ago.

“This fossil helps us understand life in the Mesozoic era,” said Yamamoto. “We need to think about everything from that time, both big and small.”

The study is published in the Journal of Systematic Palaeontology.