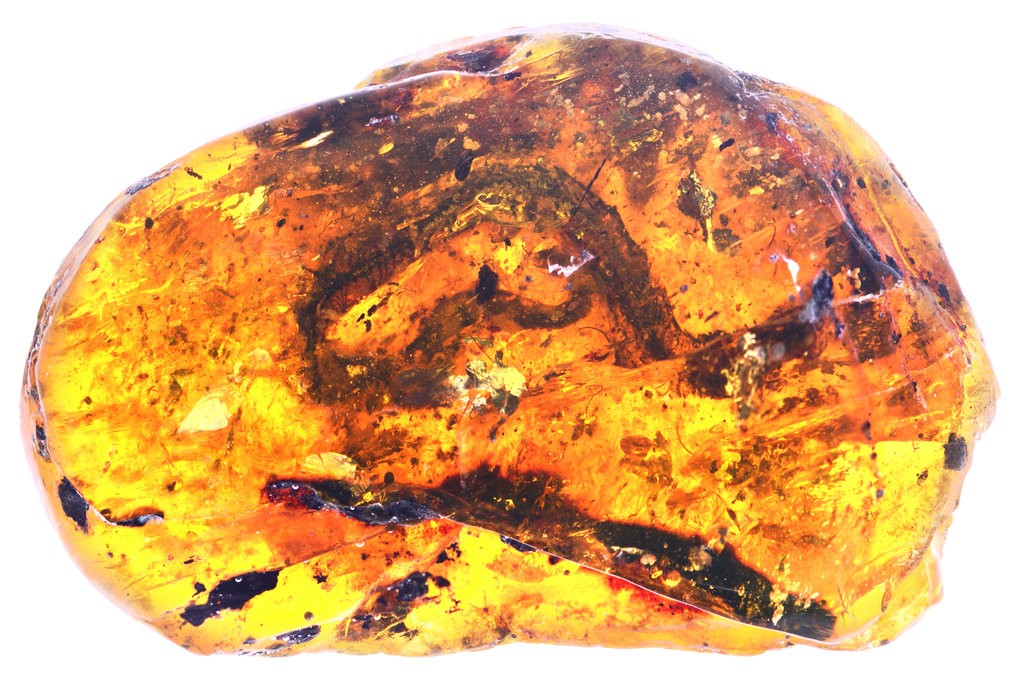 The remains of a baby snake found preserved in amber from Myanmar are estimated to be 99 million years old. The fossil, which is the first of its kind, is around two inches in length and has 97 vertebrae.

The experts also examined a second piece of amber containing what appears to be a fragment of skin from an adult snake. The specimens were obtained from an amber deposit in the Hukawng Valley of Myanmar, and date back to the early Late Cretaceous period.

Study co-author Dr. Lida Xing is a paleontologist from the China University of Geosciences in Beijing. “The fossil is the first baby snake and the oldest baby snake to yet be found,” said Dr. Xing.

Michael Caldwell is a snake paleontologist at the University of Alberta who also co-authored the study. According to the New York Times, Dr. Caldwell said that, prior to this study, a fossilized baby snake has never been found – even in the rock fossil record.

Dr. Xing told the Times that hundreds of thousands of amber pieces had been retrieved from this region of Myanmar, but no snake was ever recovered.

When the specimen was first found, the creature inside was thought to be a centipede or a millipede because the head was missing.

Micro-CT scans revealed that the fossil was that of a baby snake, and the paleontologists named the new species Xiaophis myanmarensis. It is unclear whether the snake was an embryo or a newborn, but tiny bones alongside a large spinal cord tube suggest that the baby was still developing.

“No one has ever seen a fossilized baby snake of any kind whatsoever. And having this one be nearly a hundred million old is really quite amazing,” Dr. Caldwell told National Geographic.

“Whether or not these early snakes were giving live birth, which is common in modern snakes, or whether they were hatching from eggs, is unclear. But based on size and developmental stage, this thing was a newborn.”

The study authors explained that the new snake fossils represent “a greater ecological diversity and global distribution of Late Mesozoic snakes, and more specifically, Cretaceous snakes, than was previously understood.”