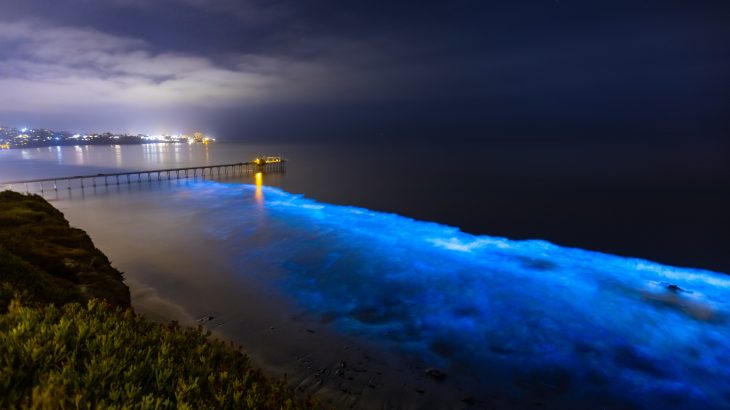 Scientists have discovered a bioluminescent gene that may give sea pickles, or pyrosomes, the ability to emit blue-green light. This is possibly the first time that a bioluminescent gene has ever been found in a member of the chordate group, which is predominantly made up of true vertebrates, such as fish, amphibians, reptiles, birds, and mammals.

Study co-author Professor Michael Tessler conducted the research while he was a postdoctoral researcher at the American Museum of Natural History.

“We know that throughout the tree of life, there are many hundreds of organisms that can produce light and that they do it for a variety of reasons,” said Professor Tessler. “Our work suggests that there is a common gene shared among at least some animals that, with a few small changes, could be responsible for this bioluminescence. A baseline gene like this could help explain how many of these very different organisms, like a brittle star and the sea pickle, ended up with the same ability to glow.”

In 2017, study co-author David Gruber was off the coast of Brazil testing a new tool for safely capturing delicate marine animals. During this expedition, the team collected sausage-sized pyrosomes.

A pyrosome is a free-floating colony made up of hundreds of tiny zooids that work together to move, eat, and breathe. Unlike many other bioluminescent animals, the displays of pyrosomes can be triggered by light.

Even though these gelatinous colonies have been described for centuries, there is much about their bioluminescence that remains a mystery.

“Understanding the biochemical pathway for pyrosome bioluminescence is of particular interest because as a chordate, these animals are much more closely related to vertebrates–and to us as humans–than many of the more traditional bioluminescent creatures that might come to mind, things like jellyfish or fireflies,” said Gruber.

Bioluminescent light is triggered by a chemical reaction between the substrate luciferin and the gene luciferase.

The researchers found that mixing a common type of luciferin with pyrosomes resulted in bioluminescence. To investigate further, the team sequenced the RNA of pyrosomes collected in Brazil and near Vancouver Island in Canada.

The analysis revealed the existence of a gene that matches a luciferase that is found in relatives of jellyfish, anemones, and corals known as sea pansies. The researchers confirmed that the gene produces light in pyrosomes.

“Being a part of this study felt like being a part of a century-old mystery novel as to how the pyrosome glows in the dark,” said study co-author Professor Jean Gaffney. “I have never worked with a species that was seemingly so alien, but as a chordate is strikingly similar to us.”

“This study advances the debate about pyrosome bioluminescence,” said Professor Tessler. “We provide justification for the idea that this animal produces its own light and it might be able to do so because of a pattern of evolution that is repeated throughout the animal tree of life.”