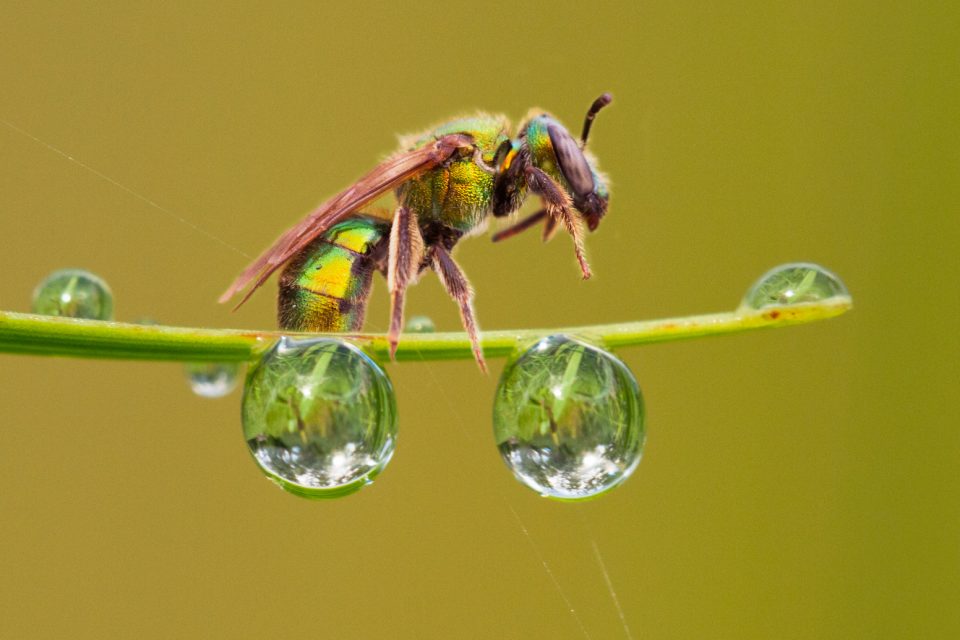 Blood, sweat and tears: The bizarre eating habits of insects

Anyone who has spent a long time in the warm and wet neotropics has probably had the experience of stingless Halictid bees, of the family Halictidae, crawling over them in a painless yet annoying search for sweat.  Bees and other insects like butterflies get plenty of sugar from flower nectar. One thing they get little of is salt, a mineral required for creating eggs among other important functions. Eating sweat from a human or wildlife as a way for an insect to fulfill its salt requirements is a widespread phenomenon. According to The Wall Street Journal, a new species of sweat bee was even found in Brooklyn, New York as late as 2010.

Another way to meet salt requirements is to gather tears from unsuspecting animals.  A 2009 study published in the Journal of the Kansas Entomological Society described bees found in Thailand that drink tears from both humans and wildlife.  Bees in two families were described as drinking tears. In this case, the researchers suggest that higher protein levels found in tears compared to pollen or nectar drives the tear consumption rather than salt.

The bees described also seemed to rarely visit flowers, potentially being adapted to exclusively or mainly tear harvesting behavior.  The potential of bees transmitting disease from one eye to another is also raised. National Geographic reports that it isn’t just bees eating tears either, other groups of insects due as well.

Birds sleeping in the Brazilian Amazon have to worry not only about blood sucking insects and tree hunting snakes but a moth eating their tears as they slumber.  What’s interesting is that biologists observed a moth, Gorgone macarea, eating the tears of an ant bird in a region of the Amazon where salt is readily available in the surrounding soil.  Another moth in Madagascar also consumes the tears of sleeping birds with a hooked proboscis. It may be that both of these moths obtain salt or more likely proteins from the bird tears.  Little is known as to whether eating tears harms birds, but it’s suspected that they may transmit diseases to livestock such as cattle when they eat their tears. Butterflies also eat tears, although not always from sleeping birds.

Live Science reported earlier this year that Phil Torres, a tropical entomologist, recently recorded butterflies consuming tears from turtles on the Tambopata River in Peru.  In a video, Torres shows eight species of butterflies from three families as well as bees landing on turtles of a species unable to retract their heads.  The only way the turtles can discourage the pesky insects is to shake their heads, which doesn’t work well. Torres chalks the consumption of turtle tears up to a butterfly’s need for sodium but it’s possible that there are other nutrients the butterflies need as well.  Torres compares the consumption of turtle tears to ‘mud puddling’ (gathering salt left in mud) and eating dung both common butterfly behaviors. In 2014, Carlos de la Rosa, an aquatic ecologist and longtime tropical researcher, observed similar behavior with butterflies and caimans.

Caimans are a subfamily of alligatoroid, their closest relatives being alligators.  In the wetter parts of the Central and South American tropics, there are six species of caiman.  The Yacare Caiman is found in Brazil’s Pantanal region, where the population numbers up to ten million individuals, possibly the largest population of single species crocodilian in the world, according to National Geographic.  On quiet boat rides at night on remote Neotropical rivers, it’s usually easy to spot the orange-ish glowing balls of caiman eyes reflected in a flashlight.  Caimans are interesting not only in their own right but also as an intrinsic part of some of the most fascinating ecosystems on Earth. Butterflies are also part of that ecosystem.

Smithsonian Magazine reported on Carlos de la Rosa’s observation of butterflies and bees feeding on caiman tears.  Interestingly crocodilians, including caiman, tear up when eating. This is where the common phrase ‘crocodile tears’ come from, comparing a crocodile crying over the death of its prey while still eating to false sympathy.  It’s not clear why caimans would cry while eating but it seemed the butterflies enjoyed the tears of the crocodilian that de la Rosa observed on the Río Puerto Viejo in Costa Rica. The caiman didn’t seem to mind the butterflies and bees eating its tears like turtles that sometimes shake their heads to discourage the pesky insects.  Interestingly with butterflies, it doesn’t stop at sweat and tears.

Blood drinking in insects is of course most famous in mosquitoes but blood offers a treasure trove of nutrients, enough that some animals like vampire bats and some leeches can subsist entirely off blood.  The nutrients from blood can be sometimes hard to resist for butterflies and other less-typical blood drinking insects as well. Most butterflies only drink blood when the opportunity arises. You sometimes see a dead animal flocked with butterflies gathering nutrient rich material, including blood.  This even happens if a living animal happens to bleed. The vampire moth is a different animal from most of its kin, though.

Entomology Today reports that vampire moth proboscises are actually evolved to pierce fruit and suck out juices.  The second purpose seems to be to suck blood from vertebrate animals, including humans. Because the moths don’t use blood as a necessary food source, they may be easier to overlook than mosquitoes.  The vampire moths are also not as widespread as mosquitoes, found only in the old world from Southeastern Asia to Eastern Europe, from Africa to Siberia. There are 17 species in the vampire moth genus Calyptra, in which eight species are known to suck blood from mammals (including humans).  There is a strange difference between vampire moths and mosquitoes.

In mosquitoes, only the female insects drink blood.  The straightforward reason is that they require more nutrients to make healthy eggs.  Male mosquitoes might also benefit from a bit of blood nutrition but in their case the risks of death seem to outweigh the benefits.  Strangely in vampire moths, it is only the males that drink blood. The hypothesis behind this strategy is also related to reproduction.  It is thought that perhaps males pass the extra nutrients gained from blood to females through their sperm. In that way, the female vampire moth could gain more nutrients for her offspring without risking death by swatting.  It seems that to insects, blood, sweat and tears are incredibly valuable resources.