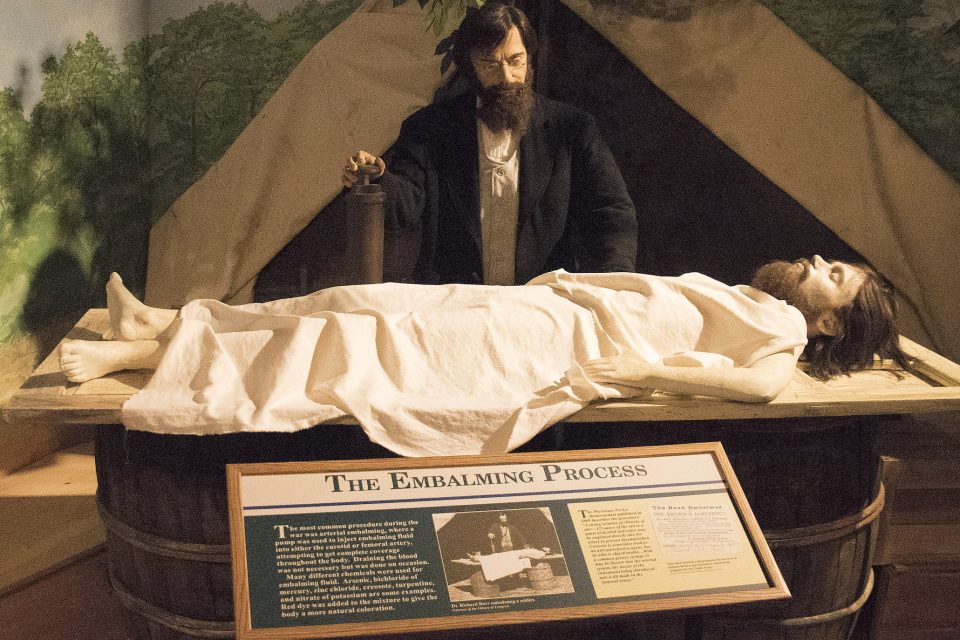 Preserving the body: Embalming practices began during the Civil War

“Alas, poor Yorick! How surprised he would be to see how his counterpart of today is whisked off to a funeral parlor and is in short order sprayed, sliced, pierced, pickled, trussed, trimmed, creamed, waxed, painted, rouged and neatly dressed – transformed from a common corpse into a Beautiful Memory Picture.”

So snarked renowned muckraker Jessica Mitford in her 1963 funeral industry exposé The American Way of Death, which critiqued the exploitation of mourners and the unnecessary fetishization and commercialization of death. Indeed, since the time of Hamlet, Western customs surrounding death have changed considerably.

Death was once, for the average person, a province of the home, with relatives caring for the deceased, hosting wakes, and interring their loved ones in local church cemeteries or on their own property. The dead themselves, while treated with reverence, washed, and wrapped in shrouds, were unmistakably that: dead. Minimal efforts were made to preserve them, or to adjust their appearance for the mourners. No refrigeration, no embalming, no cosmetics.

Though by the mid-1800s, such customs as taking photographs of the dead, often posed with family members, had taken hold, bodies underwent minimal preservation. Charcoal and alcohol were occasionally used to forestall decay, but most funerals were held soon after death so that the body did not begin to putrefy and to reduce the risk of disease.

This all changed with the outbreak of the Civil War (1861-65). The deaths of unprecedented numbers of soldiers, many of whom were far from home, led to the widespread implementation of new approaches to preserving the body. Estimates of casualties range from 620,000 to a more recent total of 752,000. At least 254,000 Confederate and 370,000 Union soldiers died in the conflict due to injury and disease, and as many as 50,000 civilians died as well. (The more-recent count includes extrapolations that substantially raise the number of Confederate dead, citing the poor record-keeping of the era.)

Reports from the battlefields detailed scenes of carnage and decay. Many soldiers ended up in mass graves, leaving relatives to mourn them in the absence of a body or to endure a time-consuming and expensive odyssey in search of their loved ones’ remains. Those who were identified and set aside for their relatives, especially Union soldiers, were often a long way from home. Transporting corpses that had already begun to decay presented a challenge. Railroads were resistant to shipping them due to the odor and the threat of infection. Enter the embalmers.

In fact, the very first casualty of the war, Colonel Elmer Ellsworth, was embalmed at the behest of none other than his friend President Abraham Lincoln. Ellsworth and his troops had entered Alexandria, Virginia on May 24, 1861, the day after Virginia had ratified secession from the Union. He was killed by a shotgun blast from the owner of a hotel in Alexandria, Virginia, after he had removed an enormous Confederate flag—visible from Washington, D.C.—from its roof. A distraught Lincoln had the body embalmed by one Thomas Holmes, a man now considered to be the “father of embalming in the United States.” After lying in state in the East Room, the body was then displayed at New York City Hall, where it served to rally Union supporters. Mary Todd Lincoln observed that he appeared “natural, as though he were only sleeping.”

So it was that the first prominent arterial embalming in the United States was conducted out of political utility rather than sentiment. Still, less than a year later, when Lincoln’s son Willie died of typhoid, an embalmer was summoned and the 11-year-old was similarly preserved. Lincoln was said to have had his son’s coffin, interred in a Supreme Court clerk’s family vault, reopened on multiple occasions in the ensuing year so that he could look upon his son’s face. He himself would be embalmed following his assassination, after which his body toured the country. The process appeared to have had limited effect; by the time his corpse had reached the end of its journey, it had begun to visibly decay.

The contemporary embalming process had made its way into American culture some two decades previously, with the publication in English (1840) of a volume by French chemist Jean Gannal. This book, Histoire des Embaumements, detailed a new process whereby bodies could be preserved by the injection of an arsenic solution into the carotid artery, making use of the vascular system to disperse the fluid. Initially devised as a means of preserving corpses for anatomical study, the applications of embalming to the funeral industry soon became clear. The French anatomist J.P. Sucquet sold his own technique, using zinc chloride, to a pair of American doctors around the same time. 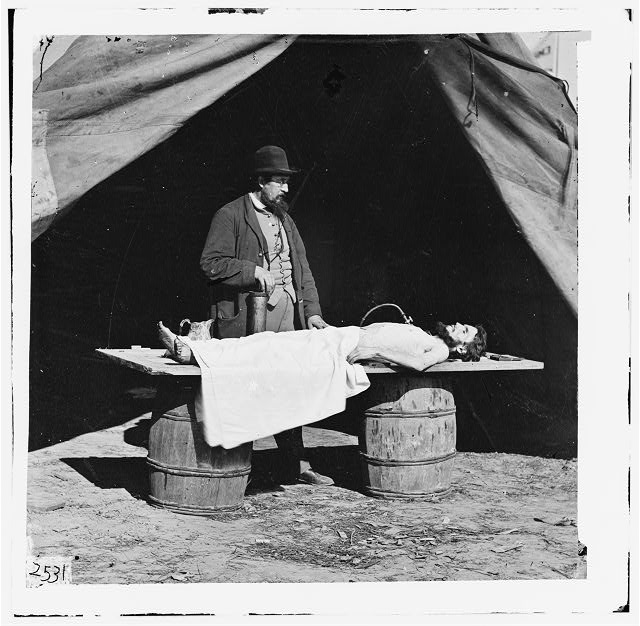 With the numbers of casualties reaching catastrophic proportions as the Civil War progressed, enterprising doctors began trailing the competing armies and offering their services. Some, such as Holmes, who claimed to have embalmed some 4,028 bodies by the end of the war, and the notorious Richard Burr, pictured above, began as Army surgeons and then resigned when they saw the profits to be made from privatized embalming. Charges for the embalming of officers, who often came from wealthier families, were usually higher than those for soldiers. Military men could even arrange for their own embalming ahead of time. Holmes was charging up to $100 by the end of the war. Burr, who sometimes performed embalmings publicly, became known for inflating his prices and for one instance in which he supposedly held the body of a dead soldier for ransom, embalming it without consulting the family and then attempting to charge them.

By January 1865, General Ulysses S. Grant—who would himself later be embalmed twice—issued an order requiring embalmers to remain behind the lines due to the negative effect they had on soldiers’ morale. Imagine seeing the men who might be preparing your body within hours before you headed off into a fusillade of gun and cannon fire. Not exactly a harbinger of hope for survival. By March, the War Department had issued General Order No. 39 Concerning Embalmers, which required embalmers to be licensed. All told, perhaps 40,000 soldiers were embalmed during the war. A number of different solutions came into use, most of which employed some proportion of arsenic, a powerful antibacterial. Also used were various types of alcohol, creosote, mercury and turpentine as well as zinc chloride and lead and aluminum salts.

Early experiments with arterial embalming, which date to at least the 14th century, often used substances such as wax, which hardened following injection. Leonardo da Vinci also experimented with other liquid solutions, using such substances as camphor, essential oils, and vermilion, to add reddish coloring. In the 1600s, Dutch anatomist Frederick Ruysch used techniques pioneered by Jan Swammerdam to preserve insects and other small creatures on humans using similar solutions. Scottish physician William Hunter pioneered the technique in England in the 1800s, notably embalming the wife of a wealthy man, who kept her on display in his home.

Though arsenic emerged as a favorite method following its use by physicians like Gannal, it presented problems when a murder victim was embalmed. The contamination with arsenic made it difficult to determine what the agent used to poison the person actually was and thus in 1846 France banned the use of the chemical. The United States, however, did not follow suit until the early 20th century; Michigan became the first state to ban it in 1895.

Embalming then moved toward the use of formaldehyde instead. Contemporary embalming fluid typically contains formaldehyde with ethanol, methanol, and other substances added. Still, the legacy of arsenic use remains. Well water drawn from areas near Civil War-era cemeteries has been discovered to be contaminated with elevated levels of arsenic and other chemicals. And scientists who work with remains from the era must be careful to avoid accidentally breathing in or otherwise ingesting arsenic, which can be fatal if consumed in sufficient quantities.

Following the war, embalming and the funeral trade became increasingly professionalized, with embalming fluid salesmen certifying undertakers in the use of their preservatives. By 1882, a National Funeral Directors association had been formed. Embalming and its associated industry became ever-more entrenched in American culture. A 1902 advertisement for Bisga embalming fluid featured an upright corpse, posed in a seated position to demonstrate the life-like qualities of bodies preserved using the fluid.

Today, cremation is rapidly catching up to traditional embalming and burial, with cremation surpassing traditional burial in popularity for the first time in 2015. Other means of disposing of bodies have also gained in popularity, notably, green burials, in which a body is interred in a biodegradable coffin or shroud without preservation.

Nonetheless, embalming remains an appealing option for many who find comfort in the so-called “memory picture” of their loved one, pumped full of chemicals and heavily made up to appear “life-like” and “peaceful.” While the chemicals used now are less toxic than the arsenic cocktails of the Civil War era, and the mandatory use of concrete vaults in many cemeteries prevents their entry into the water table, concerns remain about both the overuse of land for burial and the exploitation of grieving families, who may be upsold on unnecessary processes, products, and services. We are, it seems, still beholden to what has been called the “cult of memory”—the attempt to preserve the dead through ritual and practice and even, according to some scholars, to deny the realities of death itself.