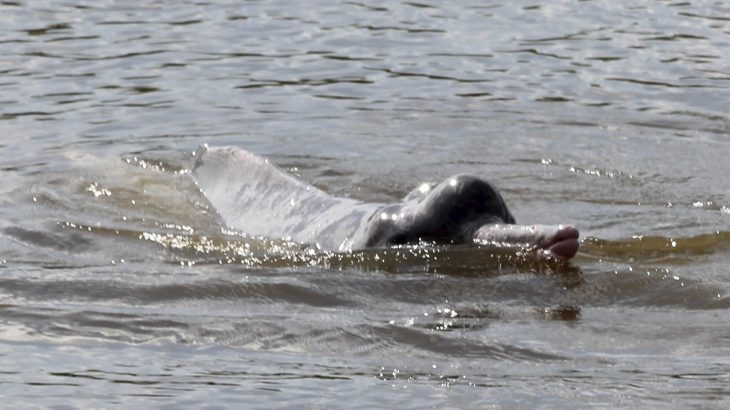 A new study from the University of Vermont has revealed that the mysterious Araguaian river dolphin of Brazil, once thought to live a solitary life, can actually communicate using hundreds of different sounds. The discovery may ultimately help scientists understand how communication evolved among marine mammals.

“We found that they do interact socially and are making more sounds than previously thought. Their vocal repertoire is very diverse,” said study co-author Laura May Collado.

The dolphins are hard to examine, despite the fact that they live in the clear water of the Araguaia and Tocantins rivers, because they are easily frightened and difficult to approach.

Gabriel Melo-Santos, a biologist from the University of St. Andrews in Scotland, found a fish market in the Brazilian town of Mocajuba where the botos regularly visit to be fed by people. The conditions here provided a unique opportunity to observe how the animals behave and interact.

The team took genetic samples from some of the dolphins and set up underwater cameras and microphones to document their interactions. After just 20 hours of recording, the researchers had collected 237 different types of sounds made by the dolphins. The most common sounds were short, two-part calls from baby dolphins as they approached their mothers.

“It’s exciting; marine dolphins like the bottlenose use signature whistles for contact, and here we have a different sound used by river dolphins for the same purpose,” said Collado.

The acoustics fall somewhere between the low-frequency calls used by baleen whales to communicate over long distances, and the high-frequency ones used by marine dolphins for short distances. According to Collado, the river environment may have shaped those characteristics.

“There are a lot of obstacles like flooded forests and vegetation in their habitat, so this signal could have evolved to avoid echoes from vegetation and improve the communication range of mothers and their calves,” explained Collado.

She said the work could provide new insight into how communication evolved in marine mammals. The river dolphins diverged from other cetaceans much earlier than other dolphins, which means that these calls may have arisen first among them.

“We can’t say what the evolutionary story is yet until we get to know what sounds are produced by other river dolphins in the Amazon area, and how that relates to what we found,” said Collado. “We now have all these new questions to explore.”

The study is published in the European Journal of Preventive Cardiology.