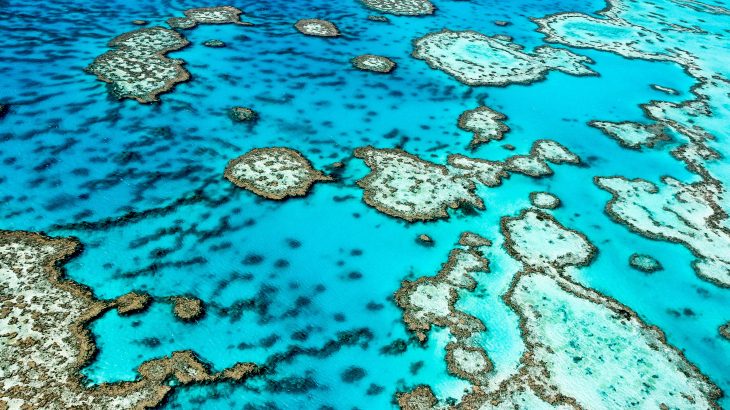 The Great Barrier Reef (GBR) is undergoing its third mass bleaching event in just five years, and this time the impacts are much more widespread. An aerial survey has revealed that the expanse of the bleaching is unprecedented, with damage across all three regions of the massive reef system.

Professor Terry Hughes is the director of the ARC Centre of Excellence for Coral Reef Studies at James Cook University.

“We surveyed 1,036 reefs from the air during the last two weeks in March, to measure the extent and severity of coral bleaching throughout the Barrier Reef region,” said Professor Hughes.

“For the first time, severe bleaching has struck all three regions of the Great Barrier Reef – the northern, central and now large parts of the southern sectors.”

Coral bleaching is caused by abrupt changes to seawater, such as pollution and too much sunlight. The leading cause of bleaching is thermal stress that results from unusually hot ocean temperatures.

The first mass bleaching event along the Great Barrier Reef took place in 1998, which was the hottest year on record. In 2016 and 2017, record heat struck the GBR again, resulting in back-to-back bleaching events.

This year brought the highest temperatures ever recorded on the GBR in the month of February.

“Bleaching isn’t necessarily fatal, and it affects some species more than others,” said Professor Morgan Pratchett, who led underwater surveys to evaluate the latest bleaching event. “A pale or lightly bleached coral typically regains its color within a few weeks or months and survives.”

On the other hand, severe bleaching can be fatal. In the northern region of the Great Barrier Reef, more than half of the shallow-water corals died in 2016.

“We will go back underwater later this year to assess the losses of corals from this most recent event,” said Professor Pratchett. “The north was the worst affected region in 2016, followed by the central region in 2017. In 2020, the cumulative footprint of bleaching has expanded further to include the south.”

The time frame between bleaching events is shrinking, which makes it much more difficult for the corals to fully recover.

David Wachenfeld, the chief scientist at the Great Barrier Reef Marine Park Authority, said that ocean temperatures over the next month will determine how well the reef manages to bounce back.

“The forecasts indicate that we can expect ongoing levels of thermal stress for at least the next two weeks and maybe three or four weeks,” wrote Wachenfeld. “So this still is a critical time for the reef and it is the weather conditions over the next two to four weeks that will determine the final outcome.”