California’s wildfires and Trump: What was the real cause? • Earth.com 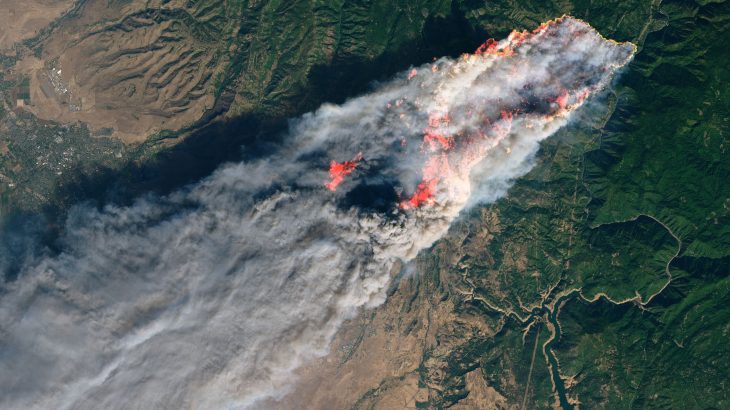 California’s wildfires and Trump: What was the real cause?

“There is no reason for these massive, deadly and costly forest fires in California except that forest management is so poor. Billions of dollars are given each year, with so many lives lost, all because of gross mismanagement of the forests. Remedy now, or no more Fed payments!”

Another tweet in the same vein followed on November 11, with Trump writing,

“With proper Forest Management, we can stop the devastation constantly going on in California. Get Smart!”

The tweets stirred up an enormous backlash, and Trump’s response has been called ill-informed and downright callous.  CNN reported that as of November 16th the death toll from California’s fires has reached 63, with more than 1,000 people still missing.  The fire dubbed the Camp Fire in Butte County is California’s most destructive and deadliest on record. With 9,700 homes destroyed and 142,000 acres burned, 45% of the fire was contained early on November 16.

There’s no doubt that Californians deserve sympathy and aid, the question then becomes whether there was some forest mismanagement contributing to the fire and if so, who is truly to blame?

Wildfires are complex with no single cause to blame for their intensity and destruction, but how we manage forests is one of the important aspects under human control.  In 2016, Earth.com reported on research showing a connection between climate change and a surge in wildfires which in turn increase air pollution.  This study also pointed out that as climate change creates a new reality for wildfires, management systems will need to be revamped to keep up.

Earlier this year, I reported on Earth.com how wildfires in the western US are sometimes connected to the politicization of and poor scientific basis of land management by the federal government.  Connected to forest fires in many parts of the U.S. is the government response to pine beetles and other native species that kill trees as well as the use of public forests for logging.  Often, controlled burns aren’t carried out regularly enough to limit beetles or uncontrolled fires which in turn leave large stands of trees waiting to burn in massive fires.

That said, there is still a certain aspect of forests and fires that will always be outside of human control.  In the case of California’s Camp Fire, we don’t know the immediate cause, and The New York Times reports that the fires are still being investigated in a process that could take months.  A downed powerline is a possible suspect in the cause of the fires though, and with that possibility comes criticism against California’s governor, Jerry Brown.

Politifact reports that in 2016, Jerry Brown vetoed legislation that looked to limit the potential problem of wildfires caused by powerlines.  Politifact quotes Brown’s reason for the veto of the 2016 bill (Senate Bill 1463):

“This bill requires the Public Utilities Commission to prioritize areas that have increased fire hazard associated with overhead utility facilities. Since May of last year, the Commission and CalFire have been doing just that through the existing proceeding on fire-threat maps and fire-safety regulations. This deliberative process should continue and the issues this bill seeks to address should be raised in that forum.”

“I do not think it would have made much of a difference, as the amount of funds was not that great… and, more importantly, no new advances would have been made.”

It’s worth noting that Jerry Brown’s office has also undertaken other efforts to deal with the problem of wildfires in California but Stewart noted that more could be done, pointing to low funding for risk assessment and mitigation, a problem that started long before Jerry Brown’s tenure.  Chuck Devore, a former California Legislator, wrote on Forbes that the fires could’ve been ‘mitigated by prevention’.  Elaborating on the problem, Devore writes:

“CAL FIRE experts expanded on the problem by blaming decades of policy that discouraged controlled burns to reduce the fuel load in the now-burning forests in the north and hillsides in the south, creating tinderbox conditions.”

Management is certainly part of the cause of California’s horrendous Camp Fire, and despite Trump’s hard words, the White House reports that the federal government is offering support of up to 75% of the cost of debris removal, emergency activities, etc.  Trump himself is visiting the site of the fires. Taking a much softer tone on the official website than Twitter, Trump is quoted,

“We will do everything in our power to support and protect our fellow citizens in harm’s way.”

These are fine words and a better tone than the initial response on Twitter.  Considering this administration’s use of gag orders on staff of the USDA and EPA, as well as burying scientific evidence of climate change, how serious could Trump be about scientific forest management?

Trump didn’t consider other contributing effects to California’s Camp Fire, including climate change, urban sprawl and frankly, bad luck.  Beyond these other contributing factors, what role does the federal government play in forest management? An article on The Hill points out that the federal government actually plays a huge role in the management of forests in California (as well as the rest of the western United States).

Almost 60% of California’s forests are under the oversight of the federal government.  Last year in California, 742,050 acres of U.S. Forest Service land burned compared with 505,956 acres of land managed by the government of California.  Trump’s administration has also wanted to cut funding to the Department of Interior and Forest Service, including money that could be used for fire mitigation.  At the same time, Trump tweeted this August about California’s fires saying fires were,

“…being magnified & made so much worse by the bad environmental laws…Must also tree clear to stop fire spreading!”

An article in the Sacramento Bee from August 7 highlights how much of the forest mismanagement is the fault of Trump and his anti-science anti-environment administration.  The truth is, if Trump was serious about improving forest management, he could. In fact, Trump has tried to cut budgets that would’ve contributed to fire management.  Luckily, Congress struck a deal making fire management and suppression without borrowing money a reality for federal lands.

So far, with incompetence and corruption as hallmarks of Trump’s head of the Department of the Interior, Ryan Zinke and Department of Agriculture Sonny Purdue, how can we expect more?  It’s clear that rather than contributing to real solutions to California’s ongoing fire crisis, Trump is using it to his political advantage.