Why are there so many wildfires in the western United States? • Earth.com 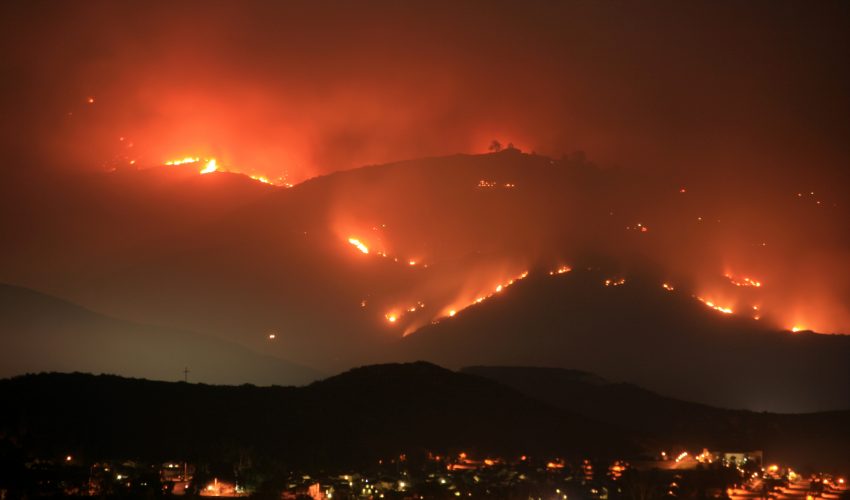 Why are there so many wildfires in the western United States?

Perhaps you live in the western United States and have seen the impact of wildfires this year in person or at least heard about it.  Perhaps you’ve been hiking in the forest and seen the aftermath of a forest fire. Maybe wildfires are simply an abstract concern and not an immediate danger to your home.  Either way, one should ask: why are there so many wildfires in the US, especially in the western part of the country? Are the number of wildfires simply natural or are we in some way causing or increasing the number of fires?

As I write this, according to FireWeatherAvalanche there are 1,690 active fires in the US, all of them in the west.  According to the Insurance Information Institute quoting the Department of the Interior, up to 90% of wildfires are caused by humans.  Financial loss from wildfire added up to $5.1 billion over a decade.

From January 1 to June 6, 2018, there have been 24,760 wildfires in the US, a little bit less than over the same period in 2017.  Fires in general are normal. But if 90% of wildfires are caused by humans, what role do land management agencies play in fires and their causes and how is this similar to the older history of fire in North America?

The history of how wildfires have been managed in the United States proceeded from large fires near the beginning of the 20th Century.  The Peshtigo fire of 1871 was the deadliest wildfire in American history, which burned around Peshtigo Wisconsin killing 1,500 to 2,500 people.  Peshtigo occurred on the same day as the more famous Chicago fire and has been largely overshadowed and forgotten. According to Wikipedia, setting small fires was a common way to clear land at the time; an unexpected windstorm fanned these small fires out of control, leading to the deadly blaze.

More important to history than Peshtigo is the Great Fire of 1910 that burned about 3 million acres of land in Idaho, Washington and Montana.  The 1910 fire is believed to be the largest fire in US history in terms of land. At the time of the 1910 fire, the US Forest Service was on the verge of being defunded and defunct.  The heroics of those fighting the fire, including Forest Service Rangers and Buffalo Soldiers, captured the imagination of the nation.  Work on suppressing the fire impressed the importance of the Forest Service upon lawmakers and fortified their funding.

It wasn’t until 1944 that the now familiar Smokey Bear appeared on posters exhorting people to be careful with fires.  1947 brought his slogan “Remember, Only YOU can prevent forest fires” but by then the mission of suppressing fires at every turn was already deeply embedded in the Forest Service.  Smokey is said to be inspired by a bear cub rescued from a forest fire, similar to the one rescued from a forest fire in Colorado this year.

Ferdinand A. Silcox was the chief of the Forest Service from 1933 to 1939. As recounted on ForestHistory, Silcox also served as the quartermaster during the 1910 fire, and much of his views on fire suppression seem to stem from that experience.  Silcox believed that fire could be eliminated entirely from the land. Such thinking lead to heavy fire suppression in the US, especially in the arid western US in the forest service and other agencies.

Interestingly, there is evidence of pre-Columbian Native Americans taking the exact opposite approach in the Appalachian region.  A study in Conservation Biology by Hazel and Paul Delcourt points out the importance of human started fire in maintaining the diversity of tree assemblages in pre-Columbian forests,

The study looked at the composition of pollen throughout time and compared it to evidence of fires in the area.  The study showed that fires in pre-Columbian times happened more often than would be expected by natural causes such as lightning.  Lightning caused fires being relatively rare in the area, with an average of 7 years between lightning fires.

The study also showed that fire adapted species and overall biodiversity was improved by fires, many of these fires likely caused purposefully by Native Americans.  Native Australians have also been known to start controlled wildfires to chase game and improve habitats. Many of Australia’s prescribed burns have taken place for so long that plants have adapted to regular human caused fires.

Ironically during the Great Fire of 1910, as many as 4,000 soldiers and other people fighting the fire gained less recognition than the Forest Service, perhaps in part because some of these soldiers were black.  Also in the aftermath of the Great Fire, despite the new objectives of the forest service to stop wildfires altogether, some contemporary foresters dissented. The Forest History Society’s website says:

“Contemporary critics, however, pointed out the flaws in the fire suppression policy. Elers Koch, a forester who had fought the Big Blowup on the Lolo National Forest in Montana, argued afterward in favor of letting backcountry fires burn themselves out. Professor Herman Chapman of Yale Forest School, who was studying Southern forests, argued that fire had an important if little understood ecological role in the landscape. And Secretary of the Interior Richard Ballinger, whose department had seen part of the newly created Glacier National Park burn along with surrounding national forest land, argued for allowing annual burning to reduce fuel loads like the Native Americans did.”

A paper in Forest Ecology and Management estimates that in prehistoric California, an area of land equal to 88% of burned land in a decade burned in a single year.  This means that before 1800, 1.8 million hectares of land burning in California was a normal year. The paper goes on to say that 2 million hectares of land burning being considered extreme is a modern perspective, without historic insight.

Today, controlled burns are commonly used but only minimally to stop what we now consider large scale, dangerous fires.  Fires are common in the west but are regarded as a known but still horrible menace, much like hurricanes on the Gulf Coast.

Other threats to forests in the west include native insects such as the Mountain Pine Beetle.  According to the Colorado State Forest Service, 3.4 million acres of trees have been impacted by the beetle in Colorado from 1996 to 2014.  The infestation of beetles is declining in Colorado but it’s also widespread across the west. I’ve hiked through wilderness areas in South Dakota where the forest is a mere skeleton of standing dead trees from beetle kill.  The Colorado State Forest Service website lists a few ways to combat beetle kill, including thinning trees by cutting. Fire isn’t listed as a way to control beetles but historically it must have played a role in beetle ecology.  It’s impossible to imagine a native beetle not being limited in some way by natural (and human caused) fires in the US.

If you’re in the west and day after day you see news of new fires springing up, if you see the haze of wildfire smoke blurring the panoramic view of mountains or mesas, ask yourself why.  Is fire suppression good science or is it political expediency and concession to logging interests?