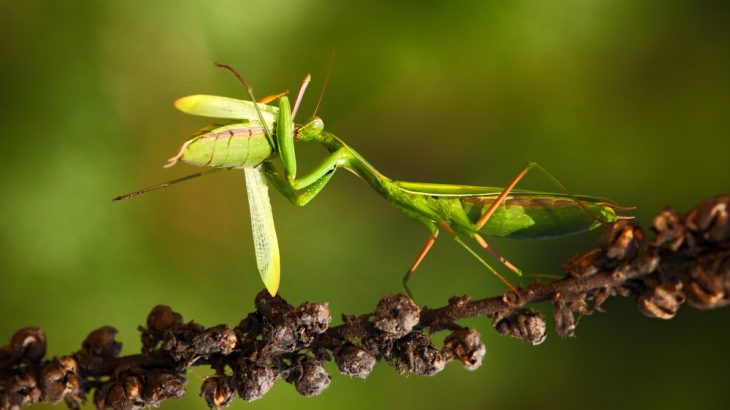 Among most human populations, the cannibalism taboo is so strong that ethics don’t matter. Even in life or death situations – such as when the Donner Party was trapped by a blizzard in the Sierra Nevada mountains – survivors often wait until near death before eating, and struggle with the guilt afterward.

Not so in the animal kingdom, where for many species cannibalism is the norm. Many female insects – including praying mantises and black widow spiders – consume the male after mating. Hamsters and mice may eat their young if they have too large of a litter or are under too much stress.

Even some herbivores have been recorded munching on their own, such as caterpillars that can’t find enough food, or snack on the wrong leaves.

Among humans, though, the cannibalism taboo leads to an almost visceral reaction.

“In one of our own experiments, participants were asked to consider the hypothetical case of a man who gave permission to his friend to eat parts of him once he died of natural causes,” Dr. Jared Piazza and Dr. Neil McLatchie wrote for The Conversation. “Participants read that this occurred in a culture that permitted the act, that the act was meant to honor the deceased, and that the flesh was cooked so that there was no chance of disease. Despite this careful description, about half of the participants still insisted that the act was invariably wrong.”

The pair of psychologists from Lancaster University have run a series of experiments in which they question participants about their own beliefs regarding cannibalism and present hypothetical situations intended to test the strength of the cannibalism taboo.

They pointed out that Roberto Canessa, a survivor of a plane crash in the Andes Mountains that left a soccer team stranded and forced to rely on eating the deceased, described cannibalizing his teammates as “stealing their souls.” This was despite his memory of urging his fellow survivors to eat his body if he should die, they said.

“Our capacity to represent the personalities of the living and the departed is unparalleled. This deep connection between personhood and flesh can mean that careful reasoning in certain situations over the merits of cannibalism is overridden by our feelings of repulsion and disgust,” the pair wrote.

This may also explain why most people are fine with eating some animals, but may recoil at eating those deemed pets.

“Research shows that the more we think of animals as having human properties – that is, as being ‘like us’ – the more we tend to think they’re gross to eat,” they wrote.