Study: most children would sleep through a fire alarm • Earth.com 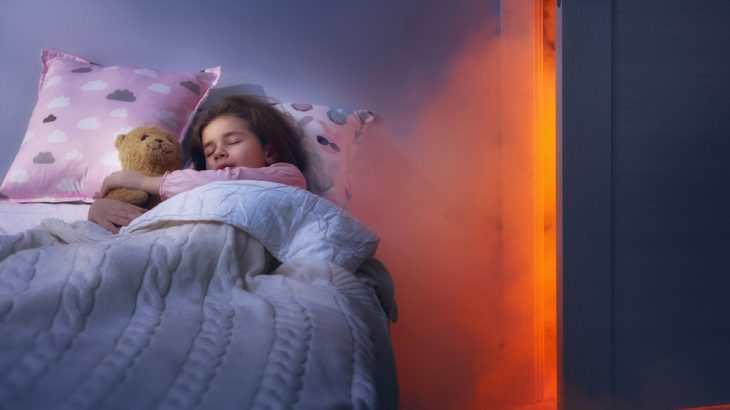 When it comes to protecting children from a house fire, a standard fire alarm may not be enough. A new study has found that only 28% of children were woken by a standard alarm; the rest slept soundly.

The study, by researchers at the University of Dundee and the Derbyshire Fire and Rescue Service, has watchdogs warning that parents shouldn’t rely on their fire alarm in an emergency situation.

“Our research has shown that current smoke alarms are not very good at waking up children,” lead author Dr. Niamh Nic Daeid told the Daily Mail. “We would ask manufacturers of existing smoke alarms to alter their packaging so that they reflect the outcomes of our work.”

The researchers worked with more than 640 children to determine whether a standard fire alarm will actually wake them up. They found that the majority slept through the alarm, or woke only briefly before falling back to sleep.

The BBC One television show “Watchdog” repeated the experiment with eight children under the age of 10. Nine of the children didn’t wake at all. The tenth woke up briefly, but retrieved a teddy bear and then went back to sleep. The segment was supervised by David Coss, a fire investigator from Derbyshire Fire and Rescue who worked on the study.

The good news? The team of researchers found that a fire alarm that uses a lower frequency, different tone, and recorded voice was effective in waking children 75% of the time.

“We have now identified an alarm sound which is much more effective at waking children and our next aim is to develop innovative devices which will link to existing smoke alarms to improve fire safety for children,” Nic Daeid said.

Daeid and the parents from the BBC One segment are now calling for fire alarm makers to warn buyers of the risk and consider changing their products.

“Smoke alarms are vital life-saving tools but manufacturers, fire services, local authorities, regulatory bodies and others with responsibility for fire safety must assert the message that they do not always wake young children and, as such, people must be advised to wake their children if their fire alarm sounds,” he told the Mail.