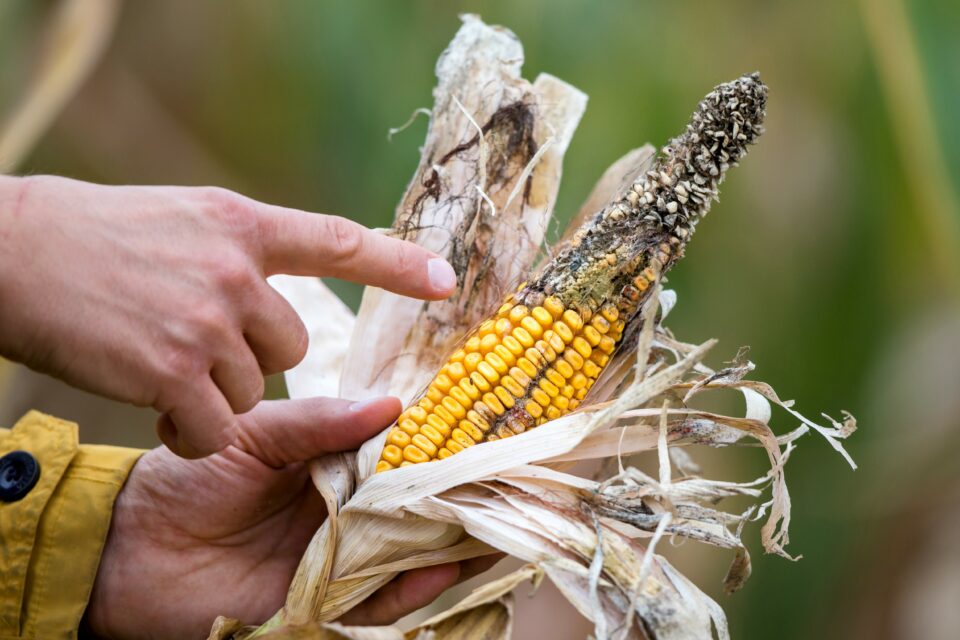 The fungi Aspergillus flavus and Aspergillus parasiticus produce a poisonous substance called aflatoxin, which can infect peanuts, tree nuts, and corn. Besides degrading corn quality, this substance can also cause significant health problems for humans and animals, depending on the amount and length of time it is ingested.

While aflatoxin contamination occurs each year in the southern U.S. due to its hot and dry climate, it has rarely been a serious problem in the Corn Belt region – an area in the midwestern U.S. covering western Indiana, Illinois, Iowa, Missouri, eastern Kansas, and eastern Nebraska.

However, a new study led by Michigan State University (MSU) has found that, as climate change continues to alter weather patterns all over the world, including in the Midwest, aflatoxin will become a significant problem in this area too.

“When we ran our near-term climate model scenarios, we found that between 2031-2040, aflatoxin is going to become more of a problem in the U.S. Corn Belt in the Midwest,” said study senior author Felicia Wu, a professor of Food Safety, Toxicology, and Risk Assessment at MSU. “The last time there was a serious problem was in 2012 when we had an unusually hot and dry summer throughout the Midwest, particularly in Iowa, Illinois, and Indiana.”

The researchers noted that since hot and dry conditions encourage fungi spores to be airborne and increase their chances of contaminating crops, keeping crops irrigated and storing harvests in cool, dry conditions could reduce the risks of aflatoxin contamination.

In addition, the use of biotechnological and conventional breeding techniques to develop hybrid crops that could withstand droughts, fungal infections, and insect damage could be an essential tool in creating more resilient and healthy crops. Finally, shifting crop production further north or south where the climate is cooler or wetter can also reduce aflatoxin risk.

For consumers concerned about eating field corn that may be contaminated with aflatoxin, Professor Wu suggests several alternatives. “Green leafy vegetables are good for your overall health,” she said. “Chlorophyll has a sandwich molecular structure that traps aflatoxin molecules so that humans excrete them before the toxin can enter our bloodstream.” Cruciferous vegetables such as broccoli, kale, or cauliflower, and allium vegetables like garlic, onions, or leeks could also help detoxifying our organism and guarding it against contaminants such as aflatoxin.