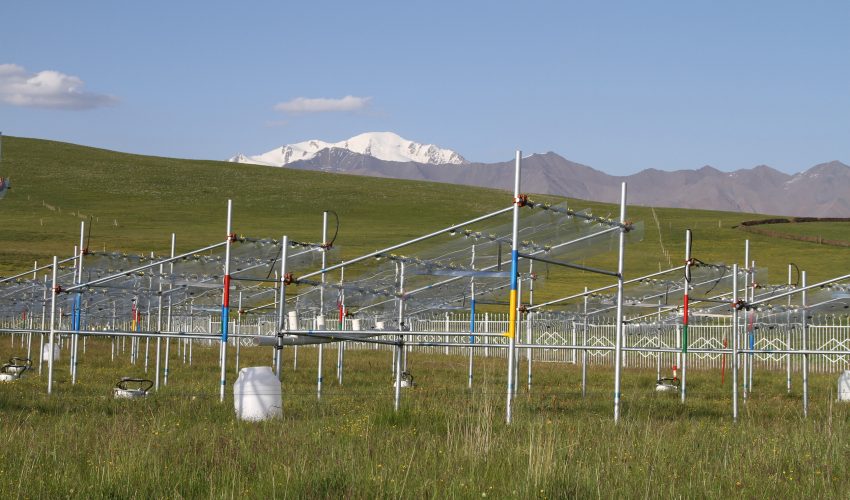 The stability of alpine grasslands in Asia’s Tibetan Plateau is threatened by a warming climate that could also jeopardize the livelihoods and ability of farmers and herders, a new study says.

Researchers from the United States and China created test plots of grass in which some were heated to two degrees Celsius above the surrounding grasslands.  At the same time, the researchers varied the amount of rainfall onto the plots, with some sections receiving 50 percent more water, and others receiving 50 percent less. There were also control sections in which temperature and rainfall were not adjusted. Each of the six conditions were replicated six times, for a total of 36 test plots.

“We found that climate warming lowers stability through increasing species synchrony in which the biomass of a few dominant species increased while that of most rare species declined,” said Jin-Sheng He, a professor in the Department of Ecology, College of Urban and Environmental Sciences at Peking University. “That indicates the alpine grasslands that have well adapted to cold environments owing to their long-term evolutionary history may be jeopardized in the future.”

The effects of climate change could be “particularly dramatic in this area,” said Lin Jiang, a professor in the Georgia Tech School of Biological Sciences.

Though temperature changes could destabilize the fragile ecosystem of the area, rainfall variations did not appear to have a similar effect, the study found.

The Tibetan Plateau is an area of about 2.5 million square kilometers in which summertime high temperatures seldom rise above 25 degrees Celsius and nighttime temperatures could drop below freezing even in the summer. More than two-thirds of the Plateau is grassland used for grazing yak, sheep and other animals. About 9.8 million people live in the area, which is also the source for several of Asia’s major river systems.

While the Tibetan Plateau is unique for its size and high average altitude, there are other areas of the world with similar conditions.

“If these findings can be generalized to other alpine ecosystems, we may need to be concerned about large variations in biomass production in these other areas, as well,” Jiang added.