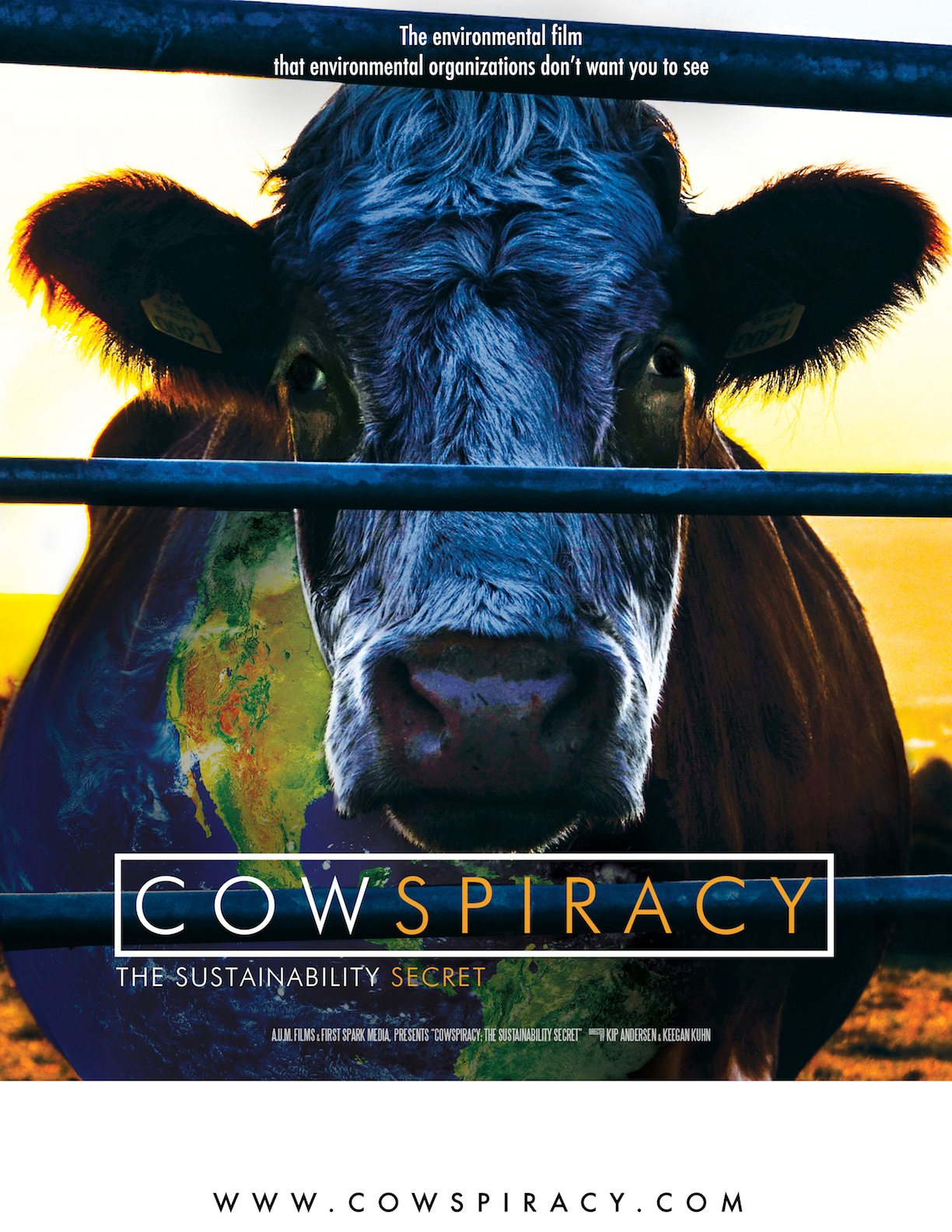 Ignore the punny title if you can. Cowspiracy, now streaming on Netflix, offers a powerful and provocative indictment of animal agriculture as the number one global cause of carbon emissions into the atmosphere. The film’s producer/director team of Kip Andersen (who’s also the documentary’s narrator) and Keegan Kuhn states that 51 percent of carbon emissions can be blamed on livestock, particularly cattle. That’s more than the CO2 emissions of oil and gas.

That figure has been challenged, however, by the Union of Concerned Scientists. The organization said that it came from a 2009 Worldwatch Institute report that was never peer-reviewed by the scientific community. The actual figure is 15 percent carbon emission contribution by livestock, a still-significant number, but far below the contribution of fossil fuels. The scientist group also said that Cowspiracy overstated the methane produced by cows. Here’s the scientists’ argument.

At any rate, Andersen and Kuhn make strong (and, presumably unchallenged) cases for other environmental damage caused by livestock production. For instance, they say that while the shale oil production method known as fracking uses 100 billion gallons of water, livestock consume 34 trillion gallons annually, from hydration to water usage in the production of grains to feed them.

Putting this in another light, Cowspiracy reports on how environmental agencies encourage individuals to take shorter showers to conserve water. But one hamburger consumes 660 gallons of water, the equivalent, says Andersen, to his showering over a two-month period. While domestic water use is five percent of total U.S. consumption, animal agriculture uses 55 percent, the filmmakers say.

The pair further blames livestock for deforestation, the overhunting of predators and cattle waste runoff into rivers and oceans. (Livestock produce 130 times more waste than humans, the film claims.)

The “conspiracy” in Cowspiracy has to do with silence. Federal and state agencies and environmental groups including Greenpeace, Sierra Club and many others say little about animal agriculture as a planetary villain or refuse to be interviewed at all.

One anti-animal ag activist said that the groups don’t want to lose their funding. This question of funding, from the animal agriculture industry to environmental groups, specifically Greenpeace, was put to one beef industry spokesperson who’d been otherwise cooperative. She twice responded that she’d prefer not to answer that question.

(In fairness, the groups’ lack of emphasis on animal ag as an environmental hazard could also be connected to the challenges put forth by the Union of Concerned Scientists.)

An Amazon Watch spokesperson discussed the very real threat of being killed for outspokenness as another reason activists might be silent. It was stated that over the last 20 years, more than 1,100 rainforest defenders have been killed in Brazil, presumable by cattle ranching interests. One of those was Sister Dorothy Stang, an American assassinated for speaking out against the industry.

In America, the threat is lawsuits. A former cattleman interviewed on the documentary was sued by the cattle industry under federal food disparagement laws for claims he made on Oprah.

The film’s producers took one odd side trip that seemed a better fit for another documentary in discussing fishing methods that are depopulating the oceans.

They also make clear that, after detailing the unsustainability practices associated with meat, fish and dairy, that their suggested solution is a plant-based diet. That point is made in horrific detail when we see tightly caged cows and chickens, and when an adorable little girl cuddles a couple free-ranging pigs at her folks’ pastoral organic farm and states in a matter-of-fact way that she shouldn’t get close to them. They’re going to be killed soon, her mother pleasantly explains. And finally, there was the scene of a pair of ducks graphically being butchered by a backyard farmer – a scene I had to fast-forward through.

How can such a film influence viewers? I had lunch at a natural food market after watching Cowspiracy. Almost everything on the menu contained chicken, bacon or cheese. I passed up the carrot hot dog and settled on the veggie melt. It was delicious, though not as filling or affordable as a Big Mac.