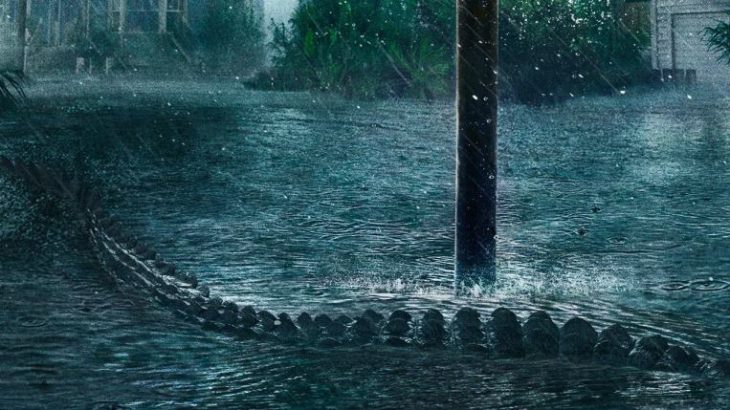 This summer, the movie Crawl joined the ranks of other animal horror blockbusters from the lineage of Jaws. As someone with an interest and love of alligators and a soft spot for horror flicks, I was guardedly excited to watch Crawl.

The film focuses on a father and daughter with a troubled relationship (along with their adorable dog Sugar) and follows the normal format of a horror film. The movie starts with Haley Keller (Kaya Scodelario) at a University of Florida swim practice where she loses a race. It seems like this is foreshadowing of her faceoff with killer alligators and this idea is only reinforced by her father calling her an ‘apex predator’ as an encouragement throughout the film.

During a major hurricane, Haley ignores posted flood warnings and drives past road closures to check on her father Dave (Barry Pepper) after a call from her worried sister. The family dog Sugar leads Haley to the darkest, creepiest part of the home she grew up in – the crawl space. Shortly after descending the stairs to the crawl space, Haley is challenged by an enormous alligator that smashes through the stairs as if they were matchsticks. The rest of the film is a violent struggle for survival with vicious alligators as the house slowly floods during the Category 5 hurricane.

The alligators are center to the film although dialogues and flashbacks try to bring some depth to the characters and story. Technology has made the alligators in the film incredible looking, if not always really accurate looking. Most people have never seen the inside of a live alligator’s mouth but I have, it’s really a yellowish off-white color. In the movie, the alligator’s mouths seem a bit more of an expected reddish color.

Minor details like this only highlight how real the alligators in the film look, though. Director Alexandre Aja revealed in an interview with Bloody-Disgusting that although some old fashioned props were used, the alligators were almost entirely CGI. That said, there are many surprising details that seem outlandish but are somewhat keeping with alligator behavior.

In one scene, several alligators tear a person apart, seeming to cooperate with each other. Despite their selfish, dim-witted reputation, alligators have been known to cooperate while hunting and feeding. In another scene, one alligator seems to almost purposefully scare Haley towards another. This behavior is also similar to real life. In his book Dragon Songs, biologist Vladimir Dinets tells of observing two crocodiles (behaviorally similar) hunting a pig. One crocodile burst from the water in front of the pig walking along a nearby trail. The startled pig ran backwards and slipped into the jaws of another waiting crocodile. Dinets also tells of watching alligators work together while hunting catfish in the US.

But there were other details in Crawl that seemed inaccurate and out of place. In one scene, Haley is trying to make her way out of the crawl space through an overflow drain pipe, near the entrance of the pipe, she encounters alligator eggs. She accidentally breaks one of the eggs revealing a yellow, completely undeveloped yolk. An underwater shot also reveals a baby alligator near the ‘nest’. Perhaps the scene is used to subtly encourage a bit of empathy for the viewer, making the savage killing of humans more understandable. Maybe the alligators are trying to feed young, or protect a nest.

Yet, the nest isn’t very realistic. The hurricane season and the alligator nesting season overlap sufficiently for the timing to make sense but the ‘nest’ looks like a pile of unprotected eggs. Alligator eggs depend on rotting vegetation to supply incubation warmth and are usually not far from water, certainly not typically under a house. It’s also odd that the alligators that hunt so ferociously aren’t near the nest to protect it, typical behavior.

The most obvious odd detail is the mis-match between undeveloped eggs and fully hatched babies. Most alligator nests hatch over a shorter period than suggested in the film. Of course, the most glaring inaccuracy in the alligators is their vicious hunting of humans and unending appetite.

It’s true that alligators sometimes pose a real threat to humans but they don’t continuously hunt for whoever they can find, as the film suggests. Alligators also have much smaller appetites than their large size suggests, as their ‘cold blooded’ metabolisms actually allow long periods of fasting. Increasing alligator aggression seems necessary to drive the plot of Crawl along but it clashes oddly with the nest scene.

Over the course of the film, limbs are lost, many background characters including gas station looters and policemen are eaten by the never-satisfied alligators. Along with the reptiles, another rarely commented upon danger continues to build in the form of a hurricane and the attendant flood. GQ suggests that hidden in the flood waters are the secret monster of the film. The encouragement that Haley’s dad uses throughout the film that she’s an apex predator suggests that perhaps humans are the most dangerous animal after all.

The hurricane waters seem to sweep the alligators along and trap the humans with them, this seems like a horror movie norm – a storm trapping the characters in a dangerous building. When you consider the question – What caused the hurricane? – the situation becomes more complicated.

It may not be the intention of the film makers but it’s easy to see humanity in the swirling impersonality of the hurricane. After all, climate change is predicted to increase the rate and severity of storms and Florida in particular is in danger of slipping under rising sea levels. Climate change is never uttered in the film but viewed from this angle, Crawl joins the ranks of other eco horror films like The Happening. Perhaps, like most deadly encounters with wild animals in the real world, humans created the horrible scenario in Crawl.