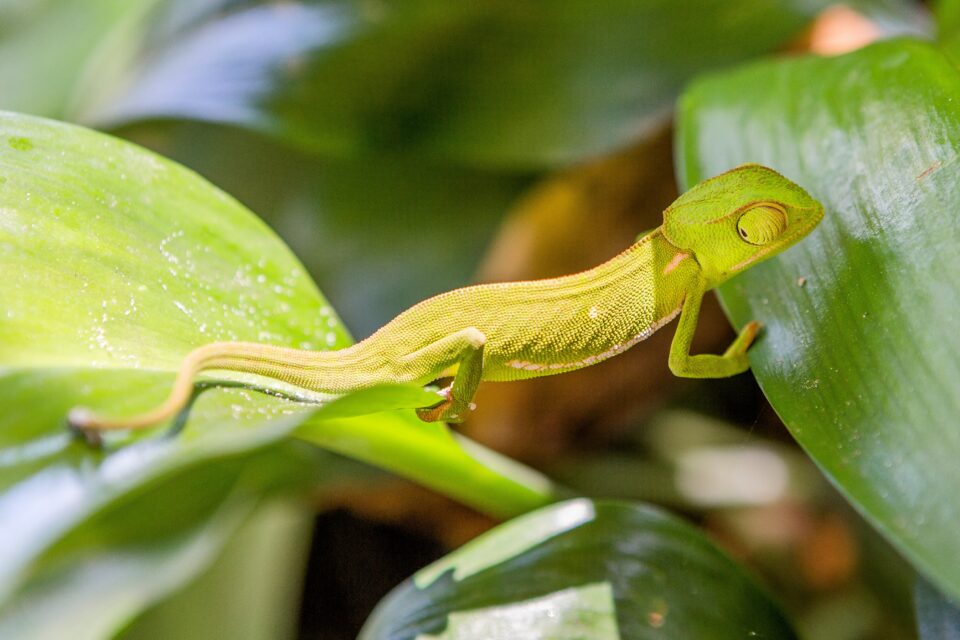 When the Chapman’s pygmy chameleon was first described in 1992, the destruction of the tiny reptile was already underway. Since the 1980’s, up to 80 percent of the forest the chameleon calls home has been destroyed. It was even feared for a time that the chameleon had gone extinct.

Professor Krystal Tolley from the South African National Biodiversity Institute and the University of the Witwatersrand, explains the beauty of the small animal.

“They are little, gentle creatures. Other chameleon species can be hysterical, hissing and biting, but pygmy chameleons are gentle and just beautiful.”

“Chapman’s in particular are one of the smallest and don’t have a prehensile tail like most chameleons, perhaps because they aren’t particularly arboreal but walk about on the forest floor in the leaf litter, crawling up into low bushes at night to sleep. They blend right into the leaf litter and perfectly pattern match the dead leaves.”

“They are mostly brown but they can change to quite beautiful blues and greens with little dots all over them and that’s probably a way of communicating with each other. They also vibrate and we could feel it when we held them. We don’t really know why but it’s also probably some form of communication. The fact they do it while held in our hands could mean it’s a way to try and scare predators.”

Now, a 2016 survey of the chameleons is being published for the first time, showing that the small reptile has indeed survived – at least for the moment.  The study, published by Cambridge University Press, was led by Professor Tolley.

The research team analyzed satellite images of the Malawi Hills where the chameleons live that were captured in the 1980’s and compared them to modern photos.

The results revealed a massive amount of forest loss. What remained of the forest was fragmented, and the researchers decided it was important to look for Chapman’s pygmy chameleons.

The researchers found some of the tiny chameleons living in small pockets of forest. Unfortunately, the remaining specimens showed signs of genetic isolation – a problem that could lead to inbreeding in small, separate populations of chameleons.

The team recommends that the chameleons be protected by folding their habitat into the nearby Matandwe Forest Reserve along with strong protection measures. Further research is needed to better understand the current status of the chameleons.

The study is published in Oryx – The International Journal of Conservation.