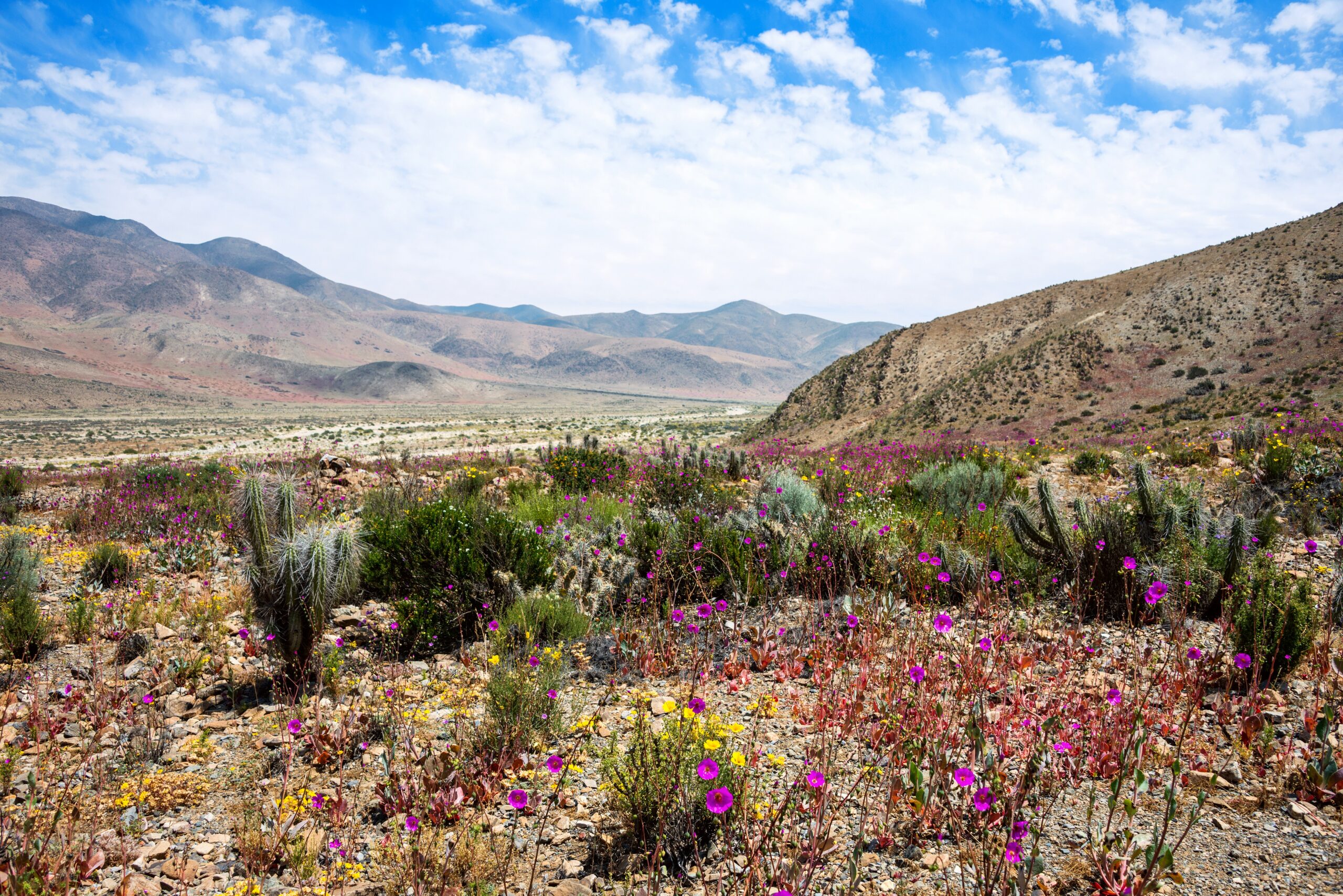 Although the Atacama desert, which stretches for 1,600 kilometers along the western coast of South America, is the Earth’s driest place, it is far from barren. Many plant species that are adapted to extreme conditions thrive here. Moreover, about every five to ten years, this desert hosts one of the world’s most spectacular sights: the so-called “desierto florido” (“blooming desert”) – amazing flower mass blooms that usually occur after rainfall.

Now, an international team of scientists has investigated which physiological and evolutionary mechanisms enable the great diversity of shapes, colors, and visual patterns of flowers during desiertos floridos, and how pollinators for whose benefit such visual extravaganza evolved, perceive these variations.

“Our aim was to shed light on the ecological and evolutionary mechanisms that cause biological diversity in extreme environments like the Atacama desert,” said study first author Jaime Martínez-Harms, a researcher at the Institute of Agricultural Research in Chile.

“Here we show that flowers of the pussypaw Cistanthe longiscapa, a representative species for desiertos floridos in the Atacama desert, are highly variable in the color and patterns they present to pollinators. This variability probably results from different so-called ‘betalain’ pigments in the flower petals.”

During desiertos floridos, C. longiscapa – an annual plant growing up to 20 centimeters which blooms in patches of purple and yellow flowers, with numerous intermediate (reddish, pinkish, white) flowers in-between – appears to be the dominant species in the Atacama desert, suggesting that purple and yellow morphs are heritable variants that can be interbred.

In order to clarify how pollinators – mostly hymenopterans such as wasps and bees – perceive these flowers, the scientists used cameras sensitive to visible light and UV, together with spectrometers to measure the reflection, absorption, and transmission of different wavelengths of 110 purple, yellow, pink, and while C. longiscapa flowers, which helped them create composite images of these variants as seen by various species of pollinators.

The results showed that the diversity perceptible to pollinators was greater than what the human eye can perceive, since these insects can also distinguish between flowers with a high versus low UV reflection.

According to the researchers, the visual diversity of the flowers is due to differences between betalains (yellow, orange, and purple pigments) that not only give flowers their colors, but also protect them from drought, salt stress, and damage from the reactive oxygen radicals under environmental stress. Moreover, this diversity appears to be driven by differences in the sensitivity and preference for different colors and patterns across various species of pollinators.

“The great variation in flower color within C. longiscapa can be explained if different species of pollinating insects, through their preference for particular flower colors and patterns, could cause these variants to become reproductively isolated from other individuals of the same plant species. This ongoing process could ultimately lead to the origin of new races or species,” said Martínez-Harms.

“In our next studies, we will further investigate the chemical identity and the biological synthesis pathways of betalains and other flower pigments, as well as their relationship to traits such as the scents produced by the flowers. This should help us to understand their role in shaping the interactions between plants and their pollinators, and in the plants’ tolerance to biotic and abiotic stressors under fluctuating climate conditions,” he concluded.