MRI scans show that dogs can understand some of what we say • Earth.com 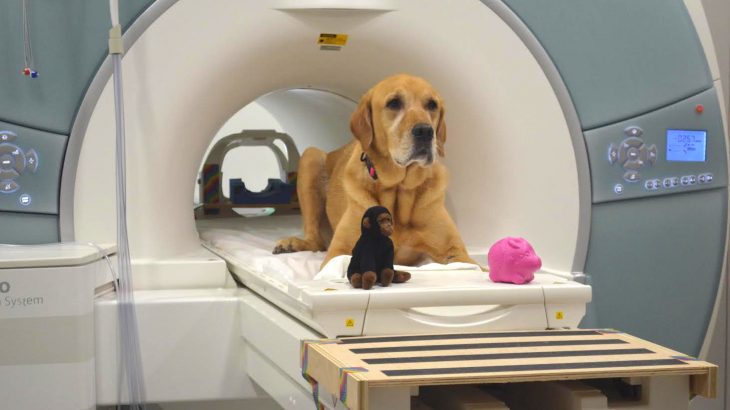 Do dogs understand words? We know they certainly perk up at words like “treat,” “walk” or “squirrel,” but the true extent to how dogs process the human language has not been well understood.

But now, researchers from Emory University have conducted a study using magnetic resonance imaging to gain a better understanding of how dogs learn words and associate words with objects.

“Many dog owners think that their dogs know what some words mean, but there really isn’t much scientific evidence to support that,” said Ashley Prichard, the first author of the study. “We wanted to get data from the dogs themselves — not just owner reports.”

The study was published in the journal Frontiers in Neuroscience, and the results show that dogs have a basic understanding of learned words and can distinguish words they know from new ones.

“We know that dogs have the capacity to process at least some aspects of human language since they can learn to follow verbal commands,” said Gregory Berns, the senior author of the study. “Previous research, however, suggests dogs may rely on many other cues to follow a verbal command, such as gaze, gestures and even emotional expressions from their owners.”

12 dogs of varying breeds participated in the study. Each owner trained his or her dog to retrieve two different objects after calling the object by name. The researchers asked the owners to choose toys that had different textures such as a stuffed animal or a rubber ball.

The dogs were trained to fetch each object depending on what name the owner called out.

Once the dog completed its training and was able to fetch the correct object consistently, the researchers then had the dog lay in a functional magnetic resonance imaging scanner facing its owner at the opening the machine.

The owner was then asked to say the name of each toy at set intervals and show the dog the corresponding toy.

One golden retriever named Eddie had his toy monkey and piggy with him for the experiment, and Eddy’s owner would first say “piggy” before holding up a toy pig.

During a control experiment, the researchers had the dogs’ owners speak a nonsense word and hold up an unfamiliar object like a hat or doll.

The researchers found heightened neural activity in the auditory regions of the dog’s brain when its owner used the new, gibberish words.

“We expected to see that dogs neurally discriminate between words that they know and words that they don’t,” said Prichard. “What’s surprising is that the result is opposite to that of research on humans — people typically show greater neural activation for known words than novel words.”

Six of the dogs showed an increased activation for the new words in the parietotemporal cortex, an area of the brain that the researchers believe is responsible for processing word differentiation.

The other six dogs had heightened activity in other parts of the brain when they heard new words.

The researchers say that the reason dogs may be more attuned to new words is that the dog is trying to please its owner by responding to what they are saying.

“Dogs may have varying capacity and motivation for learning and understanding human words,” said Berns. “But they appear to have a neural representation for the meaning of words they have been taught, beyond just a low-level Pavlovian response.”