Dolphins work together to perfectly coordinate their activities • Earth.com 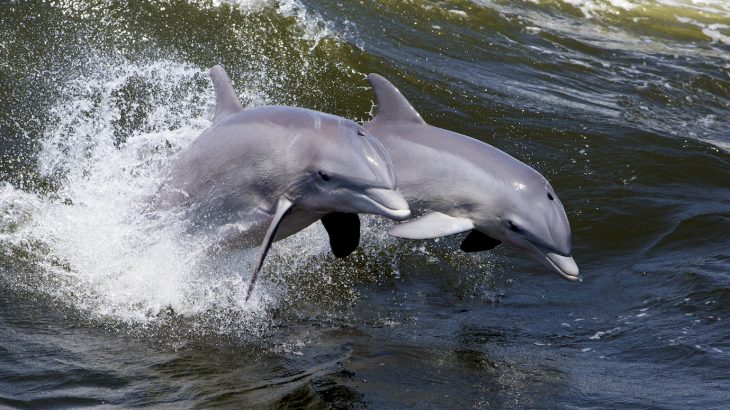 Dolphins work together to perfectly coordinate their activities

New research from the University of Western Australia has revealed that bottlenose dolphins can synchronize their movements with “extreme precision.”

A team of experts led by behavioral biologist Dr. Stephanie King conducted a series of experiments with pairs of dolphins. The trials took place in a lagoon at the Dolphin Research Center in the Florida Keys.

As the dolphins learned to coordinate their activity by pushing an underwater button at the same time as their partners, the animals demonstrated that they may be even smarter than previously realized.

In an article for The Conversation, Dr. King explained:

“Each trial began with both dolphins and their respective trainers located at the opposite side of the lagoon from the buttons, about 11 meters away.”

“The trainers would either both give a ‘press the button’ hand signal at the same time, or one trainer would give the signal first, while the second trainer asked her dolphin to wait up to 20 seconds before giving the signal.”

When the dolphins successfully pressed the button at the same time, they were rewarded with fish and social praise. Even when they had to wait for their partners, the dolphins were found to work together with a tremendous amount of precision.

“So in the early phases, we found that many successes were achieved not by the first dolphin waiting, but by the second dolphin swimming extremely fast to catch up.”

“But once both animals understood the task, this behaviour disappeared and the timing of their button presses became extremely precise (with the time difference between button presses averaging just 370 milliseconds).”