The Doomsday Vault may be sitting on shaky ground • Earth.com 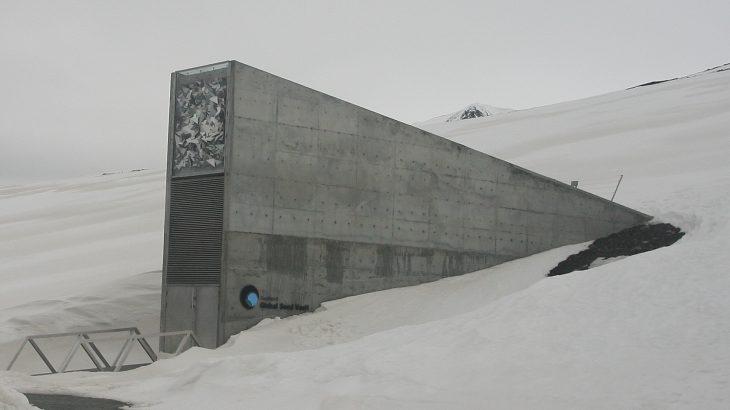 The Doomsday Vault may be sitting on shaky ground

A new study funded by the Norwegian Environment Agency has revealed that the climate in Svalbard is heating up faster than any other region on the planet. Ironically, Svalbard was chosen just over a decade ago as being a stable location for the Global Seed Vault.

Also known as the “Doomsday Vault,” the site serves as a long-term seed storage facility that was built not only to withstand the test of time, but also to endure catastrophic natural or man-made disasters. The vault, which has a storage capacity of 2.25 billion seeds, is intended to provide survivors of such disasters with a variety of crop seeds.

According to the Climate in Svalbard 2100 report, temperatures in this area of the world could rise by 10 degrees Celsius this century. Warming temperatures have already threatened the security of the Doomsday Vault when melting permafrost flooded its entrance in 2017.

But now, the situation has become much more serious, as a dramatic increase in rainfall and temperatures could compromise the frozen ground that holds the vault.

The snow season is predicted to become much shorter across the Svalbard archipelago, while the region is also expected to receive up to 65 percent more precipitation annually. The study authors are warning that these conditions will not only accelerate the rate of thawing permafrost, but could also produce more landslides and avalanches.

“Svalbard and the surrounding ocean are considerably milder, wetter and cloudier than the average for the latitude,” wrote the researchers. “This is mainly caused by atmospheric heat and moisture transport associated with the Icelandic low and the warm West Spitsbergen Current (WSC), which runs along the western coastline of Spitsbergen.”

“The West Spitsbergen Current is particularly important in the shaping of the island’s climatic conditions through its release of heat during wintertime and its influence on the concentration of sea ice.

As a consequence of the strong influence of atmospheric heat transport and the West Spitsbergen Current Spitsbergen, cold season temperature variability is very pronounced at Svalbard.”