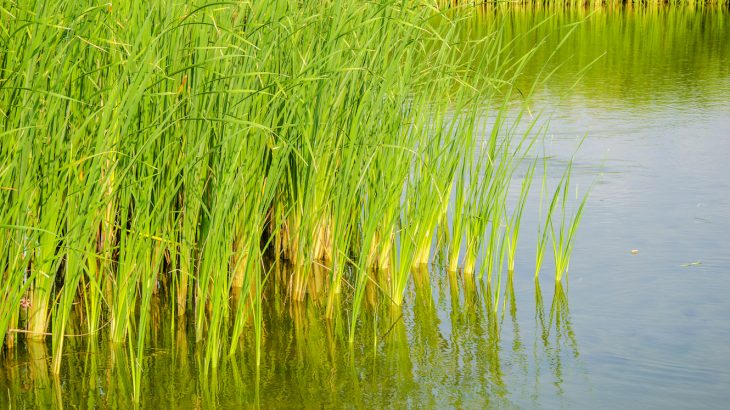 A new study from the Field Museum may completely change how some parts of the fossil record are interpreted, particularly a group of early terrestrial plants. While investigating the environment that some fossil plants lived in, paleobotanist Az Klymiuk discovered that fungi have a harder time growing in cattail roots that are underwater.

“I was studying fossil plants that are 48 million years old. In these fossils, we can see the plant cells and everything in them, including fungi. In describing these fossil fungi, I realized we actually don’t know much about fungi that are living in wetland plants today,” said Klymiuk. “There’s been very little work done, next to nothing in terms of their ecology and distribution.”

Plants must have fungi living in their roots to create the energy they need to survive. On the other hand, plants also host a group of fungi that play mysterious roles called dark septate endophytes.

Klymiuk set out to investigate the ecological purpose of these fungi, and was also interested in understanding why some fossil plants had an abundance of root fungi while others had very few. Because these fossil plants originated in swampy wetlands millions of years ago, the study was focused on cattails, which can be found in both ancient and modern wetland plants.

Klymiuk collected cattail roots from several wetlands, collecting samples from the shoreline all the way to the deepest points they could be found. In the lab, the team examined the roots under a microscope and compared the fungi in cattail roots that had been growing at various depths underwater.

The study revealed that, at least in these cattails, the fungi did not respond well to inundation. Whether they were growing in inches or feet of water, the cattails were found to contain very little fungi in their roots. On dry land, however, cattails had plenty of fungi living in their roots.

“It turns out that any degree of flooding whatsoever massively suppresses the amount of fungi in plant roots,” said Klymiuk. “This gives us a new way to understand what we’re seeing in the fossils.”

“I have some roots where fungi are completely absent. I can look and look and look and there’s nothing there. I have other roots that are just loaded, packed. To me, that indicates that we’re dealing with different levels of inundation. I feel pretty confident saying that when we find a lot of fungus in a plant root, that root was probably not inundated during its life.”

The discovery will provide scientists with a new tool for understanding prehistoric ecosystems. The findings also suggest that some of the fossil record of plant-fungal interactions may need to be reconsidered.

“There’s been this pervasive narrative, all across biology,” said Klymiuk. “The basic idea is that plants needed fungi to get out of water, to get onto land. The oldest preserved community of land plants, the 407 million-year-old Rhynie Chert, is often cited as fossil evidence for this.”

“This community of land plants has mostly been interpreted as a wetland assemblage associated with hot spring overflow or outwash, and many of these early land plants hosted mutualistic fungi, just like most living plants do today. What my research suggests, is that these plants were probably victims of intermittent flooding, as opposed to living right in the water.”

The study is published in the journal Mycologia.