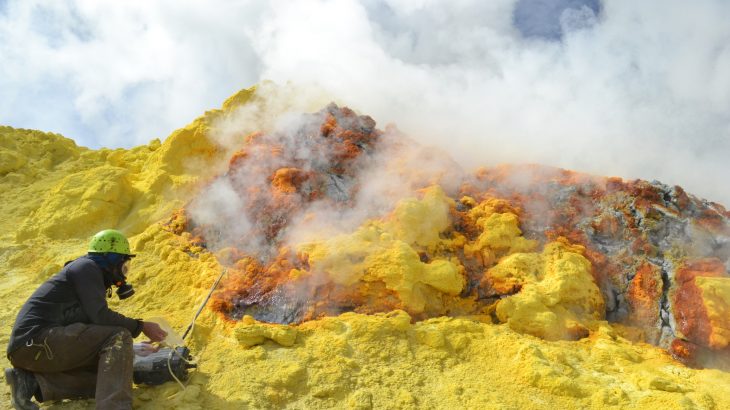 The Deep Carbon Observatory (DCO) program has released the findings of a ten-year study designed to calculate the immense carbon reserves of our planet, including how much carbon is naturally taken in and released by the Earth’s crust, mantle, and core. The research spans time from the present to billions of years past.

“Carbon, the basis of all life and the energy source vital to humanity, moves through this planet from its mantle to the atmosphere. To secure a sustainable future, it is of utmost importance that we understand Earth’s entire carbon cycle,” said DCO scientist Marie Edmonds.

“Key to unraveling the planet’s natural carbon cycle is quantifying how much carbon there is and where, how much moves – the flux – and how quickly, from Deep Earth reservoirs to the surface and back again.”

The experts found that just .002 percent of Earth’s total carbon, or 43,500 gigatons, is above its surface in the oceans, on land, and in the atmosphere. The rest is located in the subsurface, with an estimated 1.85 billion gigatons overall.

Looking at Earth’s deep carbon cycle over time, the researchers found balanced, long-term stability in atmospheric CO2 levels. The team also determined that this balance was altered by major events, such as the massive Chixculub impact in the Yucatan area of Central America, at least five times in the past 500 million years. Catastrophic volumes of carbon were outgassed during these disruptions, leading to a warmer atmosphere, acidified oceans, and mass extinctions.

Today, volcanoes and other active regions release an estimated 280 to 360 million tons per year into the atmosphere and oceans, including the carbon released from mid-ocean ridges. Annual carbon emissions from human activities, such as the burning of fossil fuels, were found to be 40 to 100 times greater than overall volcanic emissions.

According to the DCO researchers, with rare exceptions over millions of years, the quantity of carbon released from Earth’s mantle has been in relative balance with the quantity returned through the downward subduction of tectonic plates and other processes.

However, this balance was disrupted by large volcanic events about four times in Earth’s history. Carbon cycle imbalance can cause accelerated global warming, changes to the silicate weathering rate, changes to the hydrologic cycle, and intense habitat shifts that can lead to mass extinction as the Earth rebalances itself.

“The Deep Carbon Observatory has advanced understanding of the inner workings of Earth. Its collective body of more than 1,500 publications has not only increased what is known but established limits to what is knowable, and perhaps unknowable,” said study co-author Tobias Fischer of the University of New Mexico.

“While we celebrate progress, we underline that deep Earth remains a highly unpredictable scientific frontier; we have truly only started to dent current boundaries of our knowledge.”

The study is published in the journal Elements.