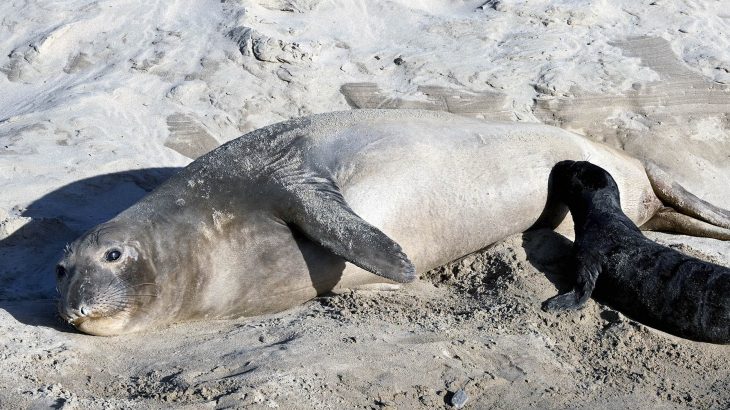 According to a new study from researchers at the University of California, Santa Cruz, most of the elephant seal pups born in a California colony spanning five decades were produced by a small number of elephant seal “supermoms.”

Researchers saw during their long-term study, which documented the lifetime reproductive success of 7,735 female northern elephant seals located at the Año Nuevo rookery, that only 6% of the females gave birth to the majority of seal pups — a whopping 55% of the total seal pup production.

“It’s surprising because there are so many more young females than older females, and you expect them to contribute more to the population,” said lead author Burney Le Boeuf, professor emeritus of ecology and evolutionary biology at UC Santa Cruz. “But it doesn’t work out that way, because most of them don’t live very long.”

Sadly, the researchers saw that three-quarters of weaned female pups die before reaching maturity and therefore never get the chance to breed. And those who do reach maturity usually only breed one to three times before they die. According to Le Boeuf, breeding takes a toll on the young females, who must put a lot of energy into raising their pups while still growing, themselves.

“The supermoms are able to pull it off,” he said. “There aren’t many of them, but they have a tremendous influence on the next generation.”

During this study, the longest-lived female lived to age 23 and birthed 17 pups. Another elephant seal supermom produced pups in 16 consecutive years.

“It’s unusual to be able to follow a wild animal throughout its life and determine how successful it is at breeding,” Le Boeuf said. “With the elephant seals at Año Nuevo, we’ve been able to follow them for two generations, more than 50 years, in part because of the proximity of this colony just up the coast from the UCSC campus.”

Female elephant seals give birth to a single pup each winter, and spend four weeks on the beach nursing their pups before weaning them off and leading them out to sea to feed. However, it’s often during this first trip that naive weaned pups struggle to find food or fall victim to sharks or orcas.

Le Boeuf said that surviving females grow larger the older they get, and larger mothers give birth to larger pups, which are more likely to survive to maturity and breed. Supermoms generally live longer than other females, and therefore breed as often as possible.

This study is published in the Canadian Journal of Zoology.