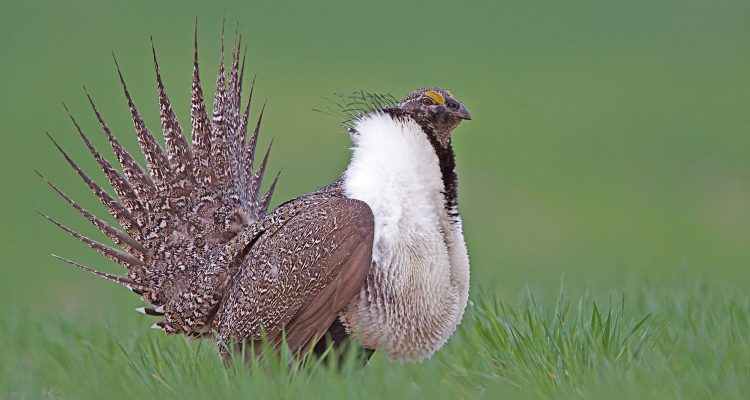 The federal government is using a new assessment of mineral resources on 10 million acres in six Western states to decide whether to ban potential mining on the land to protect an imperiled bird.

Scientists completed the 800-page review that looked at areas with high numbers of sage grouse and high-quality habitat for the bird. The review, requested by the U.S. Bureau of Land Management, was released Tuesday.

The BLM says the study will help it evaluate the economic and environmental trade-offs of withdrawing the public lands from mining in Idaho, Montana, Nevada, Oregon, Utah and Wyoming for 20 years.

“The report is critical to give us an idea of what the potential is for development,” said BLM spokesman Mark Mackiewicz.

The proposed withdrawal of the lands – subject to an 1872 mining law meant to encourage development of Western land – is part of new U.S. policies announced in late 2015. At the same time, the U.S. Fish and Wildlife Service said sage grouse didn’t need federal protections under the Endangered Species Act, a decision that will be reviewed in about four years.

Under the 1872 mining law, federal officials don’t have the discretion to deny mining claims. Withdrawing the 10 million acres from being subject to that law would allow BLM officials to block mining claims.

The 10 million acres are already under a temporary freeze from new mining claims while the BLM prepares the environmental impact statement. The freeze doesn’t affect mining claims already in place.

The Wyoming Mining Association says bentonite has many uses, including drilling fluids and sealants, and that Wyoming is the nation’s leading producer of it and cutting off access would harm the state.

“If that’s the trajectory that this goes, we’re absolutely going to oppose such a measure,” said Travis Deti, the group’s acting executive director. “We would certainly hope they would not use this as a tool to place more burdens on the mining industry in our state.”

“You’ve got a trade-off between it being key habitat and it having some valuable resource,” he said, “and they’re going to have to figure out how to deal with that.”

The publicly accessible study put together by more than 60 Geological Survey workers over about a year is expected to be a valuable resource for land managers. It will also be of interest to miners as it identifies potential mineral deposits.

“We’ve done all the heavy lifting of getting all the relevant data together in one easy-to-access package,” said Larry Meinert, head of the USGS Mineral Resources Program. “That’s a valuable resource for anybody.”