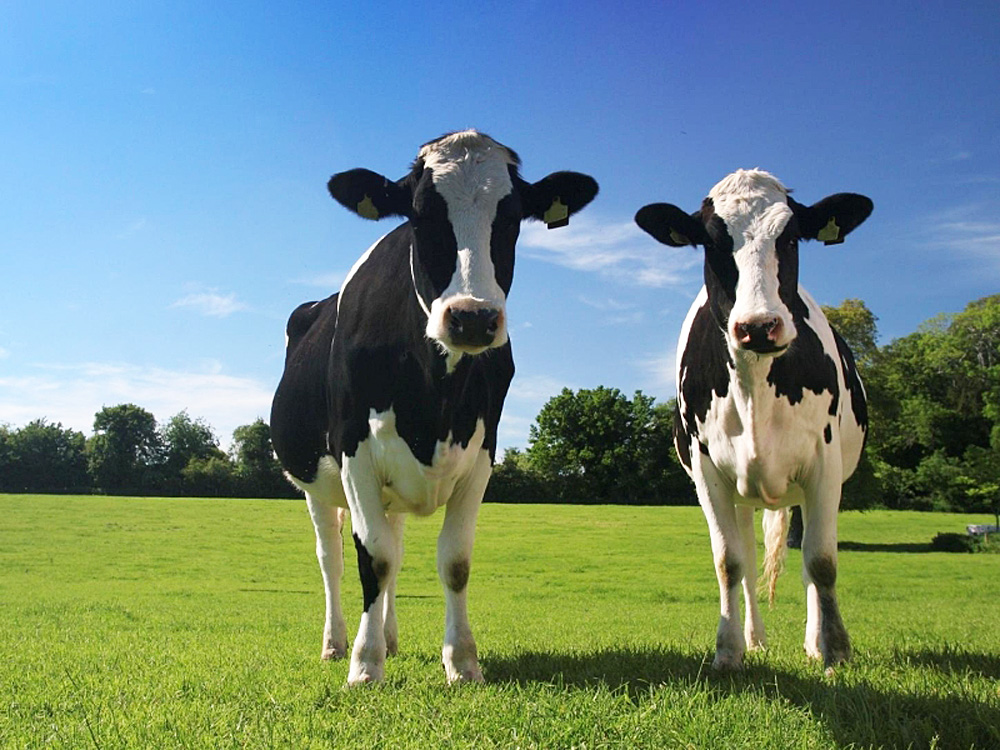 A supplement added to the feed of high-producing dairy cows reduced cow methane emissions by 30 percent and could have ramifications for global climate change, according to an international team of researchers.

In addition, over the course of the 12-week study conducted at Penn State’s dairy barns, cows that consumed a feed regimen supplemented by the novel methane inhibitor 3-nitrooxypropanol — or 3NOP — gained 80 percent more body weight than cows in a control group. Significantly, feed intake, fiber digestibility and milk production by cows that consumed the supplement did not decrease.

The findings are noteworthy because methane is a potent greenhouse gas. The U.S. Environmental Protection Agency estimates that methane from livestock makes up 25 percent of the total methane emissions in the

United States. Globally, according to the United Nations’ Food and Agriculture Organization, animal agriculture emits 44 percent of the methane produced by human activity. Fermentation in the rumen — one of the four stomach chambers of livestock such as cattle, sheep and goats — generates the methane, as a result of microorganisms that aid in the process of digestion. The animals must expel the gas to survive. The 3NOP supplement blocks an enzyme necessary to catalyze the last step of methane creation by the microbes in the rumen.

It was important to conduct the study under industry-relevant conditions, said lead researcher Alexander Hristov, professor of dairy nutrition. The researchers published their results in a recent issue of the Proceedings of the National Academy of Sciences.

“We tested methane-mitigation compounds using animals with similar productivity to those on commercial farms because the nutrient requirements of high-producing dairy cows are much greater than those of nonlactating or low-producing cows,” he explained.

“Any reduction in feed intake caused by a methane-mitigation compound or practice would likely result in decreased productivity — which may not be evident in low- producing cows.”

Methane expulsion through burping represents a net loss of feed energy for livestock, Hristov noted, adding that a high-producing dairy cow typically emits 450 to 550 grams per day of ruminal gas produced by fermentation. The spared methane energy was used partially for tissue synthesis, which led to a greater body weight gain by the inhibitor-treated cows.

The 48 Holsteins in the study received varying amounts of the inhibitor in their feed and were observed at regular daily intervals over three months. Their methane emissions were measured when the cows put their heads into feeding chambers that had atmospheric measurement sensors, and also through nostril tubes attached to canisters on their backs.

In recent years animal scientists have tested a number of chemical compounds to inhibit methane production in ruminants, and one even achieved a 60 percent reduction, Hristov said. However, the viability of that and other compounds as mitigation agents has been discounted due to concerns about animal health, food safety or environmental impact.

The 3NOP compound, developed by DSM Nutritional Products, a Dutch company that is one of the world’s leading suppliers of feed additives, seems to be safe and effective, Hristov said.

If approved by the U.S. Food and Drug Administration and adopted by the agricultural industry, this methane inhibitor could have a significant impact on greenhouse gas emissions from the livestock sector, Hristov suggested. But producers will have to have an incentive to use the feed additive.

“It is going to cost money for dairy producers to put this into practice, and if they don’t see a benefit from it, they are not going to do it,” he said.

“The thing that is critical is body gain — dairy cows go through phases, and they lose a lot of weight when they calf. They don’t eat enough, and they produce a lot of milk and lose weight, so if we can cut down the energy loss with the inhibitor, the animals will gain more body weight and recover more quickly. Further, they may produce more milk in early lactation and have improved reproduction. It’s something that will convince producers to use it.”