First African turtle that migrated to Europe made a wild journey • Earth.com 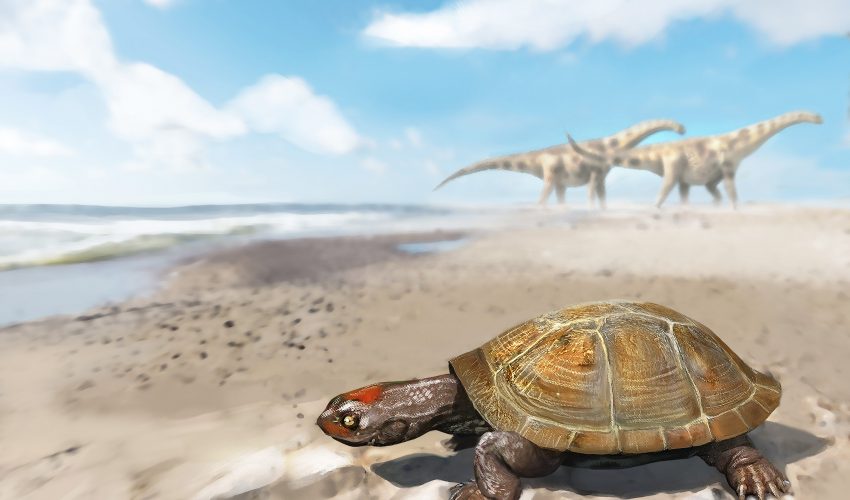 First African turtle that migrated to Europe made a wild journey

Scientists now have evidence that a river turtle made an incredible journey out of the ancient continent Gondwana 95 million years ago. The turtle adapted to marine environments and left the African region in the first known dispersal event of a turtle from Gondwana. Its remains were found in the city Algora of Castile-La Mancha, Spain, and also in Portugal.

The turtle, which scientists often refer to as “traveler,” was named Algorachelus peregrinus. It began its long journey in Africa during the Upper Cretaceous before arriving in Spain and Portugal.

“It is not just any turtle, but, as the name suggests, it gives us the necessary clues to describe how a successful migration occurred about 95 million years ago; this journey would have drastic consequences,” explained Adán Pérez -García, a researcher at the National University of Distance Education.

Millions of years ago, the supercontinent Pangea was broken down into two large continental masses including Gondwana, which is currently Africa and South America, and Laurasia, which included Greenland, Europe, and North America.

“This geographic isolation allowed the development of lineages of independent animals in both continental masses,” said Pérez-García.

The “traveler” turtle, which is now extinct, adapted from purely freshwater environments to coastal marine environments. This is how they made their way to Europe much earlier than previously realized.

The turtles settled in the new continent, becoming very abundant and diverse until the end of the Mesozoic, about 65 million years ago. Evidence of this is found in ancient fossils recovered in Guadalajara.

The discovery of the fossilized remains of a turtle shell in Portugal has provided even more insight into this migration out of Africa.

According to the scientists, what makes the journey of the “traveler” turtle a success is that it did not end in Spain. Algorachelus and other closely-related turtles continued their migration to the United States.

The study is published in the Journal of Systematic Palaeontology.