The first flower on Earth may have looked like this • Earth.com 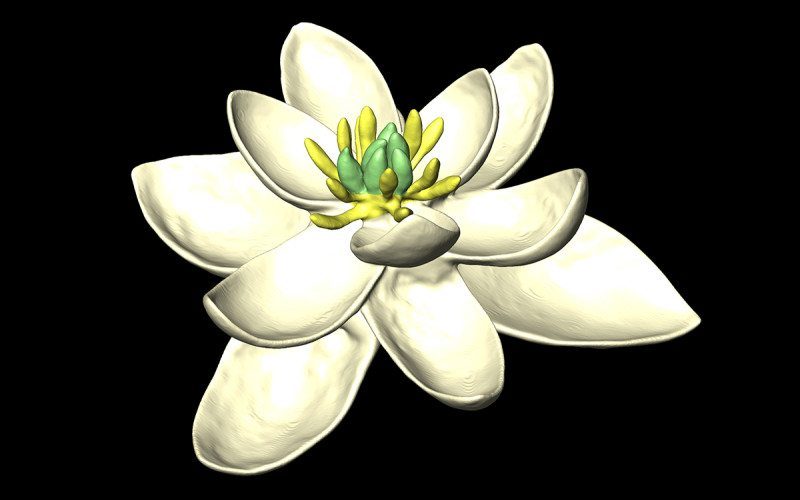 The first flower on Earth may have looked like this

When the first flowers appeared on Earth over 140 million years ago, they were all from a single ancestor. In an attempt to uncover more information about the origin and diversification of the flower, a team of scientists were able to assemble an image of what this ancestral flower looked like.

A meticulous study of 792 species helped the researchers develop an evolutionary tree that connected all living flower species. Their research produced the largest data set of floral traits ever collected, and the experts managed to reconstruct the ancestral flower.

The primitive flower looked like a water lily with wide petals and protruding pollen spikes.  Hervé Sauquet is an evolutionary biologist from Paris-Sud University and lead author of the study. He explained that it is difficult to draw a comparison between ancient flowers and today’s flowers.

“All flowering plants have evolved and changed since that ancestor, that’s how evolution works,” said Sauquet. “So there is no single species or group of species that would have existed some long time ago and still exists today unchanged.”

The experts determined that the ancient flower was bisexual and radially symmetrical  with both stamens and carpels, or male and female parts. They had multiple whorls of petal-like organs in sets of threes.

“These results call into question much of what has been thought and taught previously about floral evolution,” said study co-author Juerg Schoenenberger. “It has long been assumed that the ancestral flower had all organs arranged in a spiral.”

Fossil flowers from the time of the ancestral flower do not exist, which made it difficult for the researchers to estimate the exact features. Another amount of uncertainty lies in the fact that flowering plants, or angiosperms, can be traced back to a common ancestor 310 million years ago.

“But we don’t know yet what that ancestor looked like, nor what happened in between these two ancestors, a period of time some of us like to refer to as a dark tunnel,” said Sauquet.

Flowers, which are the reproductive structures of angiosperms, were not traced back that far.

“The origin of the angiosperm flower remains among the most difficult and most important unresolved topics in evolutionary biology,” said the authors.