Fish swim in schools to save energy • Earth.com 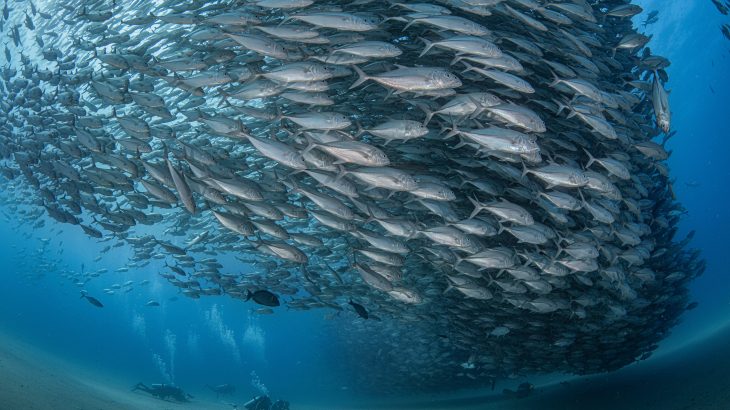 A study led by the University of Konstanz has confirmed that fish save energy by swimming in schools. The researchers used robots to provide the first conclusive evidence that schools of fish benefit from the energy produced by neighboring fish.

The team conducted experiments with biomimetic fish-like robots and found that schooling fish take advantage of swirling water generated in front of them using a simple strategy. They adjust their tail beat patterns to match the rhythms of their leaders, which is known as vortex phase matching.

When the researchers applied this strategy to the robots, they discovered that the robots benefitted from the force of the churning water kicked up by a neighbor no matter where they were positioned around the fish.

“Fish schools are highly dynamic, social systems,” said study senior author Iain Couzin. “Our results provide an explanation for how fish can profit from the vortices generated by near neighbors without having to keep fixed distances from each other.”

It has been a challenge for scientists to determine whether schooling fish save energy because it is difficult to measure the energy expenditure of free swimming fish. The new study has overcome this challenge by using robots. The researchers could directly compare the power consumption of the robots when they were swimming alone or in a group.

“We developed a biomimetic robot to solve the fundamental problem of finding out how much energy is used in swimming,” said study first author Liang Li. “If we then have multiple robots interacting, we gain an efficient way to ask how different strategies of swimming together impact the costs of locomotion.”

In more than 10,000 trials, the team tested follower fish in every possible position relative to leaders, and then compared this amount of energy consumption with solo swimming. The study clearly showed that the fish in front influence the hydrodynamics of fish behind, saving them energy.

The energy consumed by a follower fish was found to be influenced by two main factors: the distance between the follower and the leader and the relative timing of the tail beats of the follower with respect to that of the leader.

According to the researchers, the secret to saving energy is in synchronization, or how well the follower fish matches their tail beat pattern to that of the leader.

“It’s not just about saving energy. By changing the way they synchronize, followers can also use the vortices shed by other fish to generate thrust and help them accelerate,” said study co-author Mate Nagy.

“We discovered a simple rule for synchronizing with neighbors that allows followers to continuously exploit socially-generated vortices,” said Couzin. “But before our robotic experiments, we simply didn’t know what to look for, and so this rule has been hidden in plain sight.”