Fishing levels can destroy or save coral reef ecosystems • Earth.com 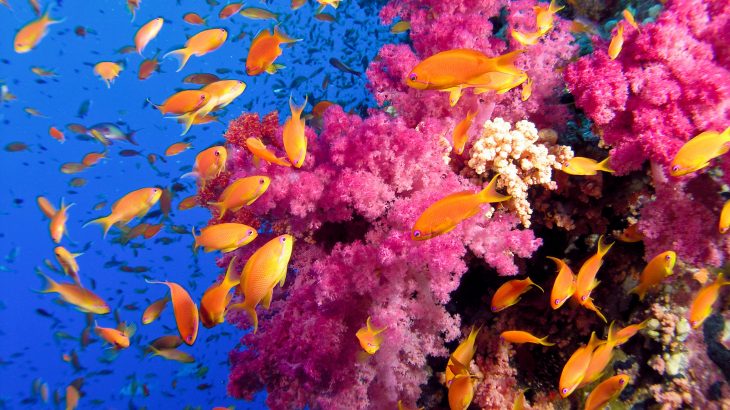 A new study from UC Boulder has produced the first evidence that coral reefs are highly sensitive to how quickly a target fishing level is reached. The researchers found that when fishing is increased too rapidly, it can cause entire reef ecosystems to collapse.

However, the results of the study suggest that fishing levels should be reached more slowly to protect reef communities. “The ecosystem depends on the pace at which the environment is changing, not just the magnitude,” explained study lead author Mike Gil.

In previous studies, Gil determined that fish look to each other to assess the risk of venturing out to eat algae from a patch of reef. With more fish at a location, it appears safer and additional fish are likely to join the feast.

This type of feedback loop also works in the other direction. If there are not many fish at a location on the reef, other fish are deterred because it does not seem safe.

“This feedback makes the ecosystem more prone to collapse under fishing pressure but also more prone to recovery as fishing is reduced. Social fish essentially cause the ecosystem to be much more sensitive, overall, and to be hypersensitive to exactly how quickly we remove fish,” said Gil.

The researchers used extensive datasets on reef fish behavior as well as artificial intelligence to track exactly what each fish did and saw every second.

“We’ve shown that an animal that maybe a lot of folks would assume is kind of dumb is, in fact, embedded in a social network and is highly influenced by its neighbors, just like humans,” said Gil.

Even fish of different species were found to pay close attention to each other, looking for clues as to when it was safe to wander out into dangerous parts of the reef. The fish also stay longer and eat more in these exposed areas when there are larger numbers of fish around.

The new details on how fast fish can be sustainably harvested can inform local and regional scale management decisions that deal with fishing quotas.

Beyond the pressures of fishing, reefs also face other human-induced environmental changes such as nutrient pollution and ocean warming, which has severely damaged reefs worldwide.

“Coral reefs are incredibly tough, resilient ecosystems, but they are not so tough in the face of many challenges happening simultaneously,” said Gil.

“As ecologists, we’re trying to understand why we see what we see when we step into nature. And if we understand how these ecosystems function, we can effectively manage them and keep them around for future generations.”