Flamingos making a comeback in their native state of Florida • Earth.com 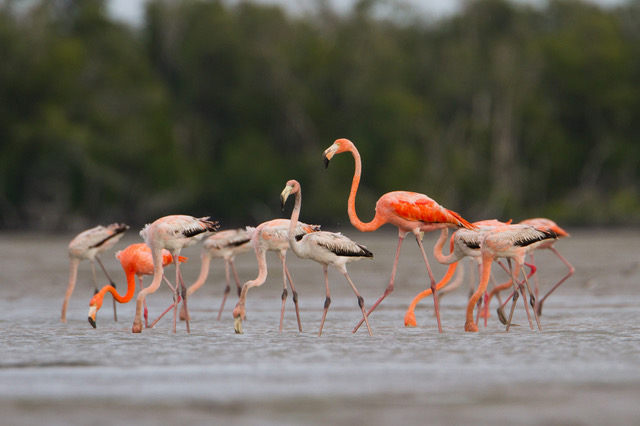 Flamingos making a comeback in their native state of Florida

The origin of American Flamingos in Florida has long been debated, and hundreds of reported sightings in recent decades has renewed the conversation about where these birds hail from. After a comprehensive review of historical evidence, researchers are reporting that American Flamingos are native to the state of Florida.

“Living in Florida, you see flamingos everywhere–in advertising, in place names, even on the logo for the state lottery–but as an actual organism, as a species, there was essentially no information available on the biology of flamingos,” said Whitfield.

“Some biologists considered them native birds that were extirpated during the plume trade of the late 1800s, and urged for population recovery measures, while others considered the rare flamingos seen around Florida to be escapes from captive colonies. We often say that in south Florida we have just two types of species, introduced and endangered, but a species can’t be both at the same time.”

Both museum records and narrative accounts provided the research team with proof that American Flamingos once occurred naturally in large flocks in Florida. The evidence indicates that the flamingos nested in Florida before they were eliminated by hunting around 1900.

While it is possible that some of these individuals are from captive flocks, there is also a good chance the flamingos have spread from wild populations in Mexico and the Caribbean.

Developing a plan for the management of wild flamingos in Florida has been challenging, and the researchers hope that the birds may now be recognized as a native species that should be protected by state and federal endangered species laws.

Felicity Arengo is a flamingo conservation expert at the American Museum of Natural History who was not involved in the study. She explained that the meticulous work by the researchers “finally sheds welcome light on status of these iconic birds in Florida.”

“Flamingo numbers have increased notably since the 1950s due to protections to species and habitats in Florida and throughout the Caribbean,” said Arengo.

“The authors are cautious and recognize the limitations of the data in their study, but they provide ample evidence that Florida was the northernmost extent of the American Flamingo prior to the early 1900s and that populations have been recovering.”