Geckos rely on their tails to survive a crash landing • Earth.com 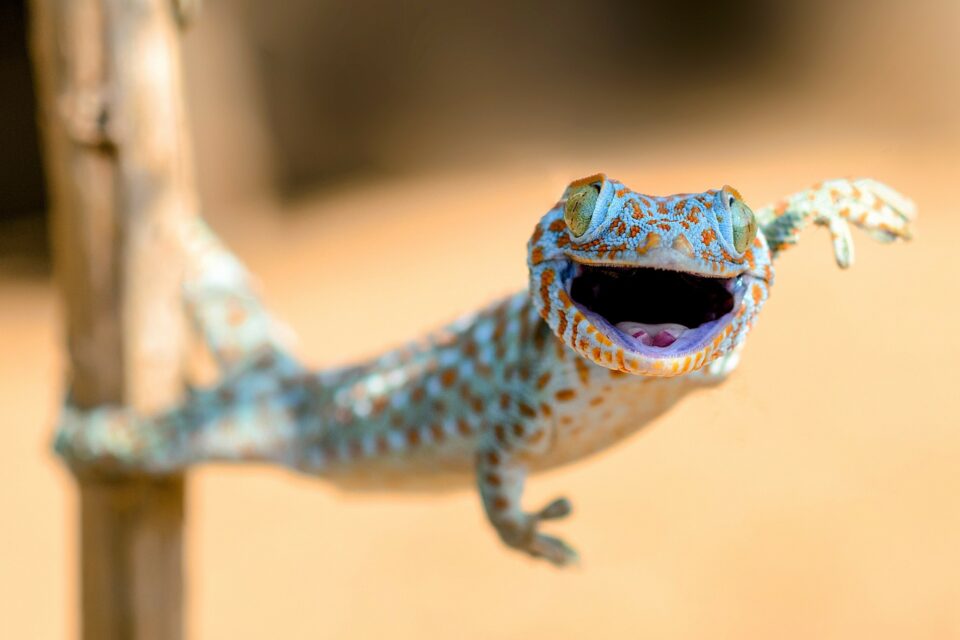 Geckos rely on their tails to survive a crash landing

A new study has revealed that geckos use their tails to survive a head-first crash landing. The study, a collaboration between experts in Robotics and Biology, also reveals that geckos are talented gliders despite having no major specializations for flight.

Geckos have remarkable abilities, including sticky feet that allow them to walk up walls and other smooth surfaces. In the new study, experiments with a robot show that the gecko’s locomotion abilities are even more impressive than what was previously realized, and that its tail plays an underestimated role.

A team of scientists at the Max Planck Institute for Intelligent Systems started out by observing the gliding skills of geckos, who can evade predators by jumping many meters from one tree trunk to the next. According to the researchers, geckos accelerate so much that everything between the jump and the landing happens in the blink of an eye. Still yet, the geckos can survive a head-first collision into a tree trunk.

To investigate, the experts designed a robotic model of a gecko with a detachable tail. In an experiment, the robot was launched onto a wall with an embedded force-sensitive scale. The robot hit the force plate as abruptly as geckos hit the trunks of trees, tilting back its torso at a right angle to the surface.

The roboticists measured the force to the front and back of the feet upon impact. They discovered that the longer the tail, the lower the force, which made it easier for the geckos to hold on. When the robots had no tail to reduce the force of impact, they lost their grip and fell.

The results confirmed the team’s theory that the tail is essential for the gecko to be able to stabilize itself on a vertical surface after colliding with it at high speed.

“This field discovery on the perching behavior of geckos has important implications for our understanding of tails as multi-functional appendages that animals can rely on,” said study senior author Ardian Jusufi.

“Ranging from inertial to contact tails, they facilitate the most extreme transitions, such as from gliding flight to collision with a wall.”

“One of the most dramatic transitions we can think of in multi-modal locomotion is to alight on a vertical surface from high-speed gliding flight to a standstill.”

Until recently tails had not received as much attention as legs or wings, explained Jusufi, “but people are now realizing that we should think of these animals as five-legged, in a way – pentapedal.”

Study co-author Professor Robert Full of UC Berkeley noted that as robotic engineers attempt to add more and more functions to robots, they are finding that they can’t introduce a new part for every capability. A tail is one structure that can serve multiple purposes.

“Nature has many unexpected, elegant solutions to engineering problems – and this is wonderfully illustrated by the way geckos can use their tails to turn a head-first collision into a successful perching maneuver,” said study co-author Robert Siddall.

“Landing from flight is difficult, and we hope our findings will lead to new techniques for robot mobility – sometimes crashes are helpful.”