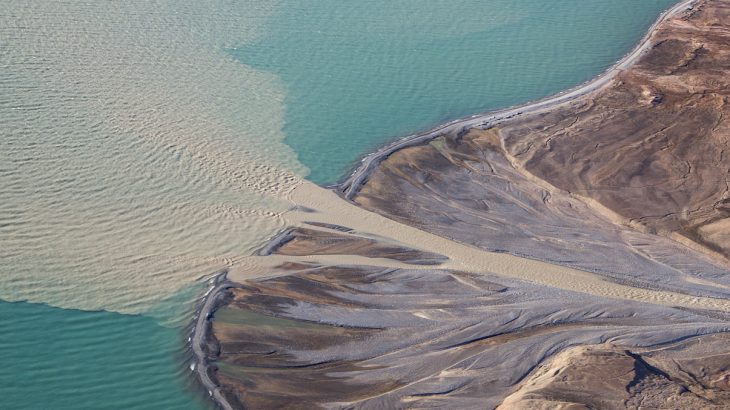 Greenland’s ice sheet, the second largest body of ice on Earth after Antarctica’s ice sheet, is melting… and melting fast.

The region is particularly susceptible to climate change, and warmer temperatures are driving glacial retreat and iceberg calving events.

But now, a new study has found that the increase in sediment deposits caused by melting glaciers in Greenland could provide a profitable economic opportunity and would be an unexpected benefit of climate change.

Right now, Greenland has about a ten percent unemployment rate and the region greatly depends on commercial fisheries, a livelihood threatened by climate change.

The region is trying to branch out into other economic ventures such as tourism and mining, but major progress has yet to be made.

Researchers from the University of Colorado Boulder, the University of Copenhagen, Arizona State University and the Rhode Island School of Design conducted a study examining the large deposits of sediment left in the wake of Greenland’s melting glaciers to see if there were any potential economic uses for this steady buildup of sand.

The study was published in the journal Nature Sustainibility.

“The melting Greenland Ice Sheet delivers an enormous amount of sediments to the coast,” said Mette Bendixen, the first author of the study. “Eight percent of the annual sediment contribution delivered to the global oceans comes from the Greenland Ice Sheet, and with continued global warming, this number is expected to increase.”

Sand and gravel are increasingly in demand across the globe. The researchers say that global sand reserves are declining because of widespread development, infrastructure, and urbanization.

If Greenland were to export its abundance of sand, it could provide the island with billions of dollars of revenue.

The amount of sand currently deposited on the coast of Greenland has a market value equal to more than half of what Greenland’s gross domestic product was in 2015.

“With this work, we present a rare example of economic opportunity brought to life by climate change,” said Irina Overeem, a co-author of the study.

The researchers caution that before any ventures are put into operation, the environmental impact of exporting sand must be carefully examined so as to ensure that it won’t harm the environment or Greenland’s citizens.

“If Greenland is to benefit from sand extraction, we must raise awareness about the resource both locally and globally,” said Minik Rosing, a fellow co-author of the study. “The Greenlandic people must be part of this. Greenland has rigorous resource legislation, and authorities and industry must collaborate to minimize potential negative impacts of extraction on the environment.”