What exactly is living in those icy cold glaciers? • Earth.com 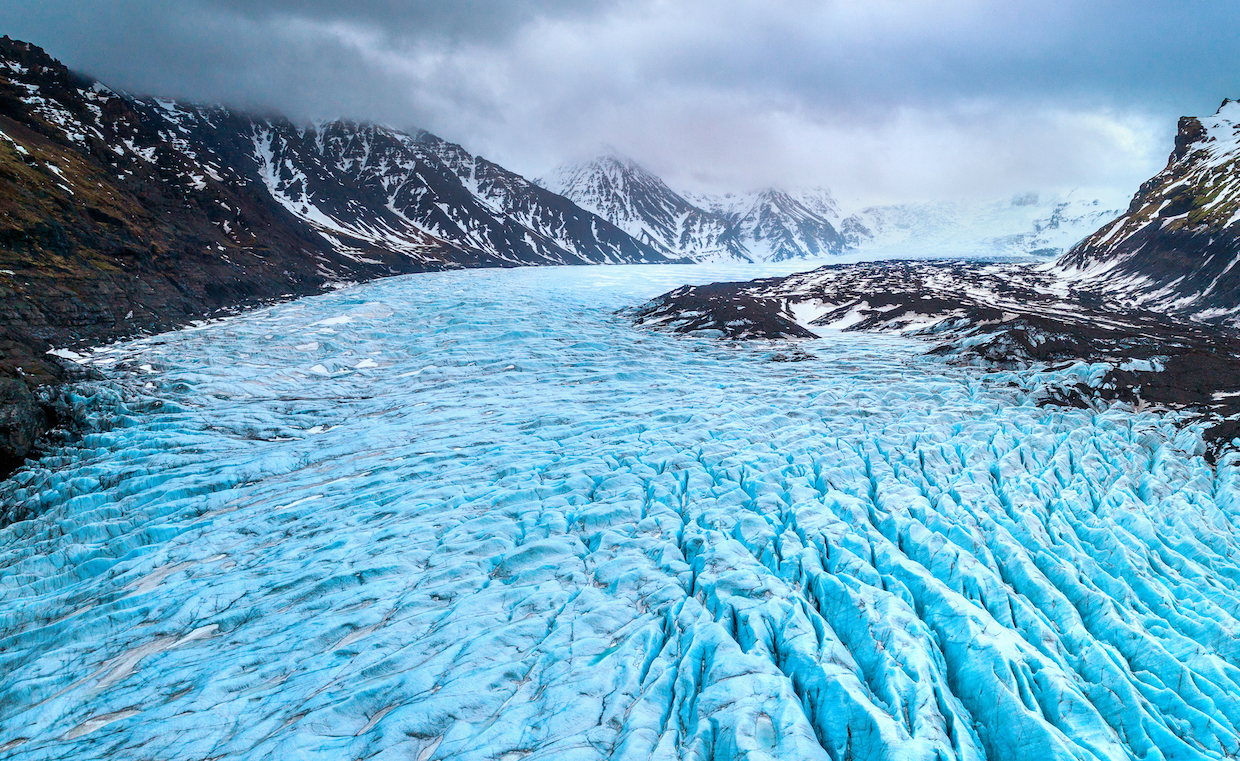 What exactly is living in those icy cold glaciers?

“In the land of the pale blue snow

Where it’s ninety-nine below,

And the polar bears are dancing on the plain,

In the shadow of the pole

I will meet thee when the ice-worms nest again.”

Glaciers initially seem barren of any sort of life.  I remember taking a bush plane off the glacial fields of Mount Denali, and the first small patches of green forest attack the senses with elation after weeks of icy monotones.  White, grey, blue and hues of the same are the dominant colors on glaciers. There is beauty in glacial scenery, no question about it, but it is a stark beauty stripped down to a limited pallet.

Looking closer at ice though, changes perspective.  As hard as it is to believe, some glaciers actually contain worms living inside chunks of ice, relatives of the more common earthworm.  When exposed to any sort of heat, the glacial ice worms (Mesenchytraeus solifugus) will die and melt around 40° F.  The worms are tiny, only about ¼ of an inch in length but common on glaciers of the North Cascade range of Washington.  The North Cascade Glacier Climate Project estimated as many as 7 billion ice worms on one glacier on Glacier Peak in Washington.  The ice worms are in the same family as earthworms but obviously have some extremely unique adaptations.

Ice worms were first discovered in Alaska, where Robert Service enlarged their legend with exaggerations in his poetry.  So far ice worms have been found in Alaska, Washington, Oregon and parts of Canada but nowhere else in the world.  It’s easy to understand that an animal which melts at 40°F would have a hard time crawling down from the mountains and spreading across the planet, even if there are glaciers elsewhere.

Ice worms hide in glaciers during the heat of the day, coming to the surface of ice and snow during mornings and evenings.  Scientists aren’t sure whether the ice worms release a chemical antifreeze to create tunnels in ice or if they simply use cracks already there.  Interestingly the chemistry of ice worm proteins is different allowing (even obligating) them to live in cold environments.

The diet of ice worms changes the common view of snow as pure and free from blemish.  Snowflakes are often formed when ice crystals bind to bacteria or other microbes living or dead.  Scientific American reports that microbiologist have found microbes at the center of snowflakes from places as far ranging as Canada, Montana, France and Antarctica.  Purified water without microbes has a harder time forming snowflakes.

There’s also a lot more algae in snow than the casual observer is likely to guess.  Far from being pure or lifeless glacial ice and snow is full of microscopic or macroscopic but tiny life.  Some snow known as ‘watermelon snow’ can have a large density of a cold loving alga (Chlamydomonas nivalis) which colors it pink or reddish.  Even normal looking snow under closer examination reveals a thriving if simplified ecosystem which is sufficient to supply food for ice worms.  Ice worms have been observed with their tail end anchored in ice while their front (mouth) end moves through glacial melt-water, apparently searching for food.  Dissections of the worms have also revealed that their digestive content consists of single celled organisms, mainly algae but also bacteria and other microscopic creatures.

Given the number of ice worms found in some glaciers, their impact on local environments may be underestimated so far.  North Cascades Glacier Climate Project estimated that with ice worms and other organisms living in glaciers, meltwater from glaciers could contribute over 500 million organisms to streams.

Sadly, the melting of glaciers may cause the end for the ice worm or at least some populations.  It’s impossible for ice worms to move from a melting glacier to a more stable one and although there are billions of the worms, they’re limited to a small part of the Earth.

It isn’t just odd tiny worms making their lives out on the ice.  When I went to climb Mt. Denali I was a little bit surprised to learn that there were ravens willing to dig through feet of snow for buried food caches.  I was only a little surprised though; I’ve also seen corvids on Mt. Rainier’s glaciated slopes and in Rocky Mountain National Park in the winter. A few types of birds actually use glaciers as places to find food.  Smaller birds often eat worms and other invertebrates, while larger raptors sometimes eat other birds and small mammals on glaciers.

Of course many penguins nest on ice sheets.  However, there is a less famous bird that nests on glaciers. The white-winged diuca-finch (Diuca speculifera) nests on glaciers through the Andes of Bolivia, Peru, northern Argentina and Chile.  A quick Google search yields images of typical round twig and grass type nests settled into the ghastly blue beauty of crevasses.  According to Wikipedia, the ‘glacier bird’ as the finch is sometimes called, lays two eggs in April or May, the young fledgling their nests in June or July.

According to Audubon.org, the white-winged diuca-finch is part of the Emberizidae family.  Distant relatives of the diuca-finch include Lapland longspur, American tree sparrow, and snow bunting.  All of these relatives breed in the Arctic but none of them actually nest on glaciers. Despite the dangers of nesting in a place as forbidding as an icy glacier, it certainly reduces the number of predators the white-winged diuca-finch must face.  At the moment, little is known about the glacier bird’s population but given its broad range, the IUCN considers it a species of least concern in terms of conservation.

Earthsky.org reported on the many mammals visit glaciers.  It’s possible that large mammals with a good deal of fur visit glaciers simply to cool off, like a large shaggy dog I once saw rolling in alpine snow on a Colorado summer day.  Caribou, musk ox, bison, elk, pica, big horn sheep and other herbivores have all been found on glaciers.

Wolverines have been observed catching prey in glaciers.  Undoubtedly, meat left in the virtual icebox of a glacier would last longer and smell less, thus attracting fewer other animals to steal the kill.

Glaciers are difficult places to do research and organisms like ice worms are hard to study.  There is still a lack of data and observations on glaciers, even as they continue to melt.

Other organisms like the overly fluffy Woolly Bear Caterpillar live in the remote Arctic but not on glaciers and have incredible adaptations to the harsh cold.  A handful of animals like musk ox, penguins and polar bears are commonly known from the coldest parts of our planet but many more like ice worms are largely ignored by the public.  Most people don’t know about the Wood Frog (Lithobates sylvaticus), a species that freezes in the northern winter, it’s heart ceasing to beat, seemingly dead until being thawed and revived in warmer weather.  Few people would suspect that jellyfish live in boreal waters or that strange fish live below ice shelves in Antarctica.

The greatest tragedy of loss would be not fully understanding the depth of it.  As glaciers melt and the planet warms, what strange creatures do we stand to lose?