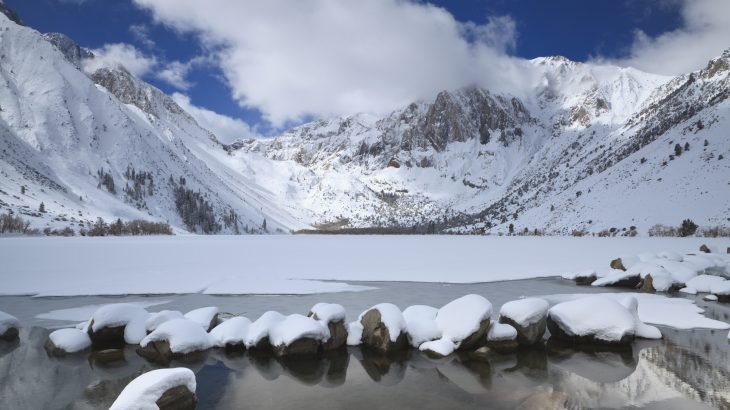 A team of researchers at the Department of Energy’s Berkeley Lab has investigated how the amount of fresh water that originates in the Sierra Nevada mountain snowpack will be affected by future global warming. After analyzing the headwater regions of California’s 10 major reservoirs, the experts are predicting a 79 percent drop in peak snowpack water volume by the end of this century.

The researchers also found that the timing of the peak snow melt could advance by four weeks, creating a delay between the time water is available and when it is needed the most. The investigation, which was focused on when and how snow melt would change, was based on climate simulations at the middle and the end of the century across five different climate models.

Alan Rhoades is a Berkeley Lab postdoctoral fellow and the study’s lead author.

“This study is unique in that we’re sampling across a community of models so we can see if models disagree at mid-century and end of century across a number of different snowpack measures, such as peak timing, total water volume, and melt rate,” said Rhoades. “What we found is the models usually disagree more at mid-century, but by end century they are pretty much in unison with another that under a high-emissions scenario there will be a dramatic decline in Sierra Nevada snowpack by 2100.”

Snowpack melt is a critical source of  water in California. Mountain snowpack provides the state with about two-thirds of its fresh water supply, much of which comes in a very narrow window.

“Our precipitation is really intermittent and extremes-driven,” said Rhoades. “We basically get 50 percent of our annual precipitation in five to 15 days, or one to two weeks. Our water demand is highest during the summer months when we don’t get a lot of precipitation, so we really rely on mountain snowpack as a stopgap for our water supply.”

The amount of snowfall is projected to decrease while rain could increase, which will contribute even more to the issue. Rhoades explained, “So as the world continues to warm, these storms will get even warmer and won’t readily get to freezing, whereby you could have snowfall or snow accumulation and the persistence of snow on the surface.”