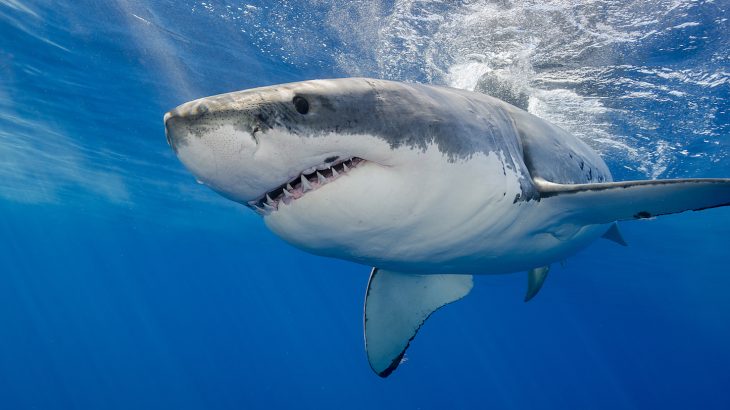 Great white shark sightings, which have become a way of life in Cape Cod this summer, are causing major concerns for the safety of swimmers. Experts say that the rapidly increasing population of gray seals is primarily to blame.

Leslie Reynolds, chief ranger at the Cape Cod National Seashore, explained that the white sharks are feeding on seals and the seals are coming closer to shore. Swimmers have been warned to stay away from the seals and to stay out of deep water.

Charter boat captain Doug Brown told CNBC, “The sharks come right up out of the water to grab the bait. They are not bashful. I have been out in the bay all my life, but I’ve never seen great whites to this amount. They are sometimes right under my boat.”

There is some evidence that the presence of younger great white sharks is contributing to the abnormal activity.

Dr. Greg Skomal of the Massachusetts Division of Marine Fisheries (DMF) has led a study on white sharks in the North Atlantic for nearly five years. The team spotted 149 great white sharks off of Cape Cod in July alone, which is nearly twice the number observed last July.

Data from the study is still being analyzed, but Dr. Skomal said smaller great whites that measure about eight to 10 feet likely appeared in larger numbers this year. He explained that these younger sharks could be responsible for some of the encounters that have recently gone viral, particularly those where sharks are snatching fish off of anglers’ hooks.

According to Dr. Skomal, smaller sharks tend to feed on large fish like striped bass, while larger adult sharks usually feed on seals.

“Cape Cod may represent a productive feeding ground not just for mature white sharks, but also for juveniles. It’s something we’ll certainly be watching out for.”

Dr. Skomal added, “If anything, it’s indicative of a healthy population. As the white shark rebounds across the East Coast, we should be seeing a broader range of sizes.”