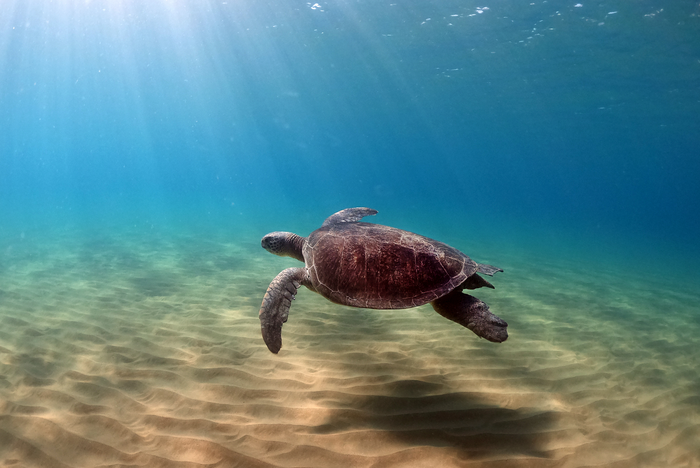 The recovery of green turtles in Cyprus is largely dependent on an Egyptian lagoon where they feed, according to a new study from the University of Exeter. When the researchers tracked female green turtles that were nesting on beaches in Cyprus, they found that 74 percent of these turtles hunt for food in Lake Bardawil.

The study revealed that the number of green turtle nests in Cyprus has nearly tripled since the early 1990s. However, these turtles will be extremely vulnerable to future changes in the few feeding sites they depend upon, particularly Lake Bardawil on Egypt’s northern Mediterranean coast.

Lake Bardawil is a lagoon with a man-made opening that connects to the ocean. The lagoon, which was created in the 1950s as a fishery, provides green turtles with an ideal foraging site.

“Since about 2010, our tracking of turtles from Cyprus has shown a large increase in the number foraging at Lake Bardawil,” said study lead author Dr. Robin Snape. “At the same time, the number of adult turtles foraging around Cyprus and Turkey has declined – possibly due to high bycatch (accidental catch) of turtles in fisheries there.

“The overall increase in nest numbers appears to be driven by protection of nesting sites in Cyprus and conditions at Lake Bardawil. It’s possible that the lake will reach its capacity, and at that point the green turtle population could stop increasing.”

According to Professor Annette Broderick, it is vital that Lake Bardawil is managed in a way that protects green turtles while supporting the livelihoods of fishers. “Reducing bycatch and protecting habitats in other locations could also increase green turtle numbers and reduce reliance on this single location.”