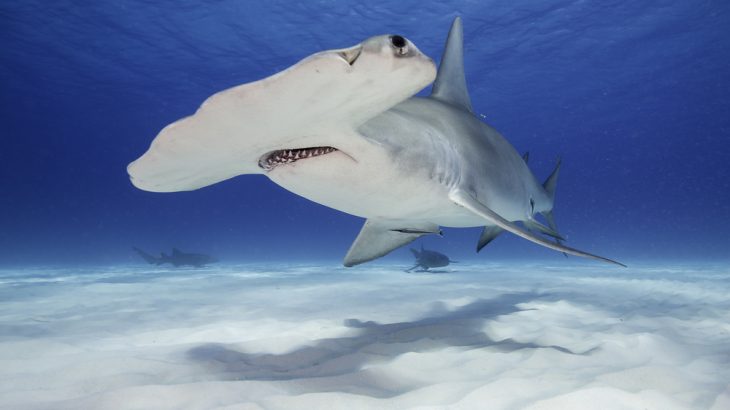 A pair of marine scientists surveying herring populations in the ocean southwest of Ireland spotted a rare sight: a hammerhead shark.

The distinctive predators aren’t usually seen so far north, and none have been sighted in that location before, researchers said.

“While scanning the ocean surface, we sighted a dorsal fin unlike anything we had encountered before. It was quite different to the fins seen on basking sharks and blue sharks,” said John Power, one of the marine scientists who spotted the hammerhead shark. “After consulting available ID keys, we agreed that the shark must be a smooth hammerhead.”

Hammerhead sharks can grow to 20 feet in length, and are recognizable due to their flattened head with long protrusions for their eyes. The shark species is endangered, but also known for its adaptability.

The researchers, from the Marine Institute in Galway, were participating in the annual Western European Shelf Pelagic Acoustic Survey, which stretches from France to Scotland and west of Ireland. The survey use acoustic and biological data to study the populations of herring, boarfish, horse mackeral, and some marine mammals and seabirds.

“Our Irish waters support a range of marine life and diverse ecosystems, including 35 known species of sharks,” Dr. Paul Connolly, director of fisheries and ecosystems services at the Marine Institute, said in a news update on the organization’s website. “This is an exciting encounter, especially since a rare deep-water shark nursery, 200 miles west of Ireland, was discovered by Irish scientists last year using the Marine Institute’s Remotely Operated Vehicle.”

“This sighting of a new shark species, shows the importance of our fishery surveys to monitor our marine environment, and to observe changes in our oceans and marine ecosystems. Observing and understanding a changing ocean, is essential for protecting and managing our marine ecosystems for the future,” Connolly said.

The shark species prefers warmer waters, and usually spend most of the year in the Caribbean and off the coast of West Africa. They summer in cooler waters, but not generally as far north as Ireland’s southern coast.

Dr. Simon Boxall of the Southampton Oceanography Institute told the Daily Mail that he had never heard of a hammerhead shark in Irish waters before. However, the rising temperatures of the ocean near Ireland – which have increased by 2.5 degrees Celsius over the past 20 years – are likely to bring other new species to the area, he said.

“It could be a very lost hammerhead shark but more likely it is because our oceans are getting warmer,” Boxall told the Mail. “There is no reason why more shark species like hammerheads and Great Whites can’t exist in our waters. I am sure these species are more common than people realise, it’s just that they haven’t been seen.”

“They are not particularly interested in humans and attacks on humans are rare,” he said.

No fatalities due to hammerhead shark attacks have been recorded, the Daily Mail reported.