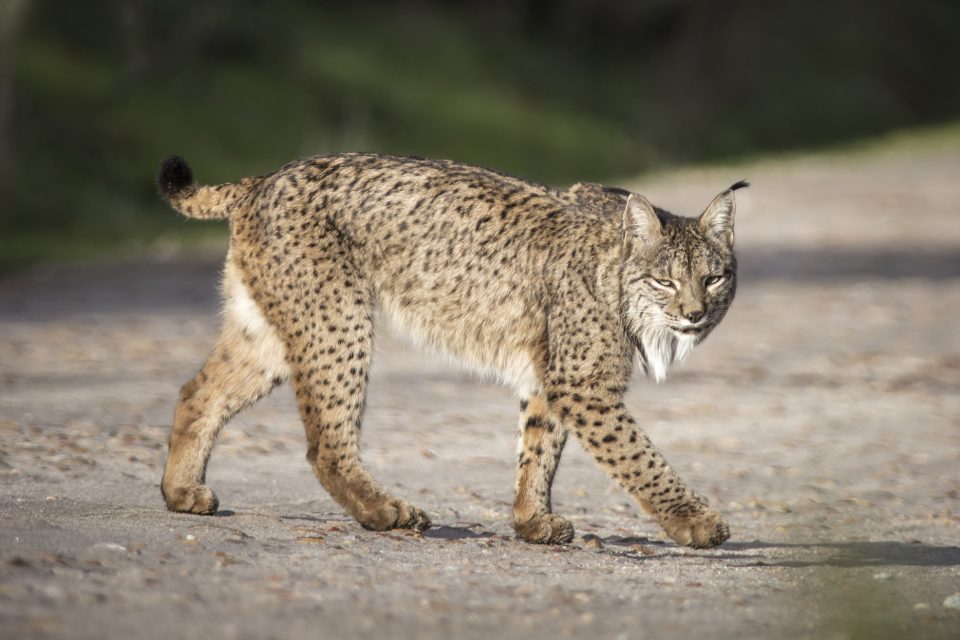 The sunny hills and plains of southern Spain may not, like the Amazon rainforests or the savannahs of Africa, evoke images of wildlife in peril. Pastoral and balmy, the region is dotted with farms and small towns. To those who don’t frequent the area, it seems frozen in time, a picture of Mediterranean bliss. In fact, this idyllic landscape is the last stronghold of one of the few large predators to survive in Europe. And though efforts in the past several decades have resulted in a remarkable resurgence, the golden-eyed, spotted ghost of the Iberian Peninsula is still hanging on by a thread.

The Iberian lynx (Lynx pardinus) was once widespread in Spain and even outside of it. The species is one of four species of lynx. The others are the bobcat (L. rufus) and Canadian lynx (L. canadensis) of North America, and the Eurasian lynx (L. lynx) of Europe and Asia. The Iberian lynx, which diverged as a unique species some 1.5 million years ago, is intermediate in size between the bobcat and the Eurasian and Canadian species.

As recently as the late Holocene, it ranged into France and Italy. (A species known as the cave lynx is now thought to be either a subspecies, or the progenitor, of the Iberian lynx.) Theories vary as to how the Eurasian species and the Iberian species interacted. Some contend that the Iberian lynx was pushed out of the majority of Europe by the larger Eurasian lynx while others suggest that their ranges only ever overlapped slightly.

Whatever the case, since at least the early 19th century, the Iberian lynx has been in decline, its range having shrunk to small parts of Spain and Portugal. Beginning in the 1940s, that decline became even more precipitous. It wasn’t until 1963, however, with the publication of a paper on the subject, that its plight received any real attention. This resulted in the protection of the species from hunting in Spain in 1966; a hunting ban was not instituted in Portugal until 1974.

Nonetheless, the population sustained even further reductions during the period leading up to the turn of the century. The species was considered extirpated in Portugal by 1992. By 2002, the species was restricted to a small area of southern Iberia, perhaps 2% of the area it once inhabited. Its two remaining strongholds were Doñana National Park and the Sierra Morena Mountains. And the population amounted to a mere 94 individual animals.

That year, the lynx was listed as critically endangered by the IUCN and efforts begun to conserve it in the 1990s were ramped up substantially. The largely EU-funded LIFE Iberlince project has been at the forefront of the efforts to restore the species to its former range.

Begun in the mid-1990s, the project received an influx of funding following the realization a decade later that the species was truly in crisis. To date, some $75 million dollars have been spent in an attempt to salvage the decimated population. Four breeding centers, three in Spain and one in Portugal, have been successful in inducing the animal to reproduce in captivity. In addition to reintroducing captive-bred specimens to their primary refugia in the Iberian peninsula, they have also expanded the species’ current range to the Montes de Toledo and the Matachel Valley in Spain and the Guadiana Valley in Portugal.

As of 2016, 404 Iberian lynx live in the wild, largely due to reintroduction efforts, which have created new breeding populations. The captive breeding programs have been careful to select genetically distant specimens in order to avoid problems with inbreeding in an already shallow gene pool.

Despite this quadrupling of the population from its nadir, the Iberian lynx still faces a multitude of threats to its ultimate reestablishment. Poaching, somewhat curtailed by national regulation, nonetheless still poses a danger. The fragmentation of its habitat by agricultural endeavours such as strawberry farms and timber plantations haven’t helped. Worse still is the expansion of roads through its habitat. In 2014, 22 Iberian lynx perished due to car collisions. Conservationists have constructed underpasses for them, but automobiles remain a significant obstacle to fully restoring these finicky felines. And finicky they are.

Perhaps the greatest spectre hanging over the efforts to save the Iberian lynx is the alarming decline of the European rabbit (Oryctolagus cuniculus). This colonial species of lagomorph constitutes some 90% of the lynx’s diet. An adult lynx needs to capture one rabbit a day and a breeding female needs three. While in times of desperation they will resort to eating partridge (Alectoris rufa), and other birds, and may take the fawns and calves of fallow deer (Dama dama), red deer (Cervus elaphus), and mouflon (Ovis musimon), they really do prefer the tender meat of rabbits. That’s the problem. As ubiquitous as the rabbit might seem in other parts of the world, the European rabbit population has dwindled alarmingly in Spain.

A strain of rabbit hemorrhagic disease swept Europe beginning in 2011. It devastated a population already etiolated by myxomatosis, a fatal disease intentionally introduced worldwide in the 1950s as a means of controlling unwanted bunnies. By 2014, hemorrhagic disease had claimed nearly 90% of the rabbits in the lynx’s home range. In an effort to compensate for this loss, hundreds of thousands of rabbits have been released into the areas currently inhabited by the lynx. Artificial warrens have been constructed to encourage their persistence. And supplementary food and water are offered to otherwise wild specimens.

While the numbers suggest that these efforts have been somewhat successful, conservationists were vexed when in 2015 the IUCN downgraded the Iberian lynx from critically endangered to endangered. Though it may be slowly reestablishing its former range, factors such as climate change imperil its ultimate survival. The spotted spectre of the Iberian peninsula isn’t out of—or rather, into—the woods yet.