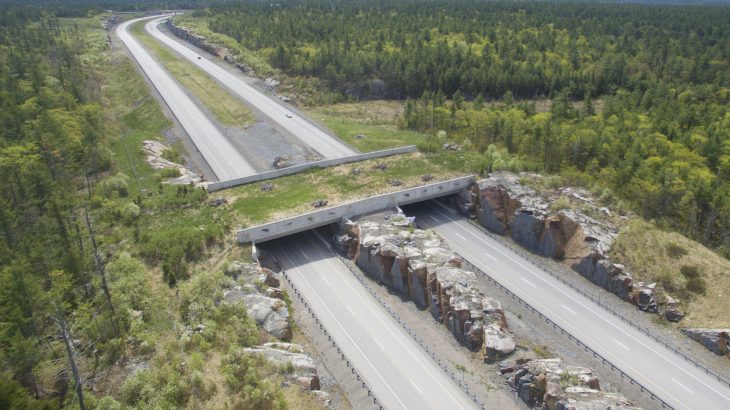 Driving past a wild animal carcass is a sad yet inevitable part of many drives throughout the United States. As human expansion continues, we are increasingly encroaching on animal habitats resulting in human-wildlife conflicts and casualties. But wildlife corridors use an innovative approach to help mitigate the effects of habitat fragmentation and protect wild animals.

Wildlife corridors are structures which link two or more wildlife habitats. The corridors help animals cross over roads and other obstacles, which have historically caused high rates of mortality. According to the non-profit Culture Change, 1 million animals are hit by motor vehicles every day in the U.S.

Habitat loss poses the greatest threat to wildlife today and range size is seen as the most important predictor of extinction risk. Habitat loss adversely affects wildlife in many ways, such as reducing their access to resources, making them easier targets for poaching, decreasing genetic fitness and pushing them closer to humans. Exacerbating the effects of habitat loss is the issue of habitat fragmentation. Not only are animals’ habitats becoming smaller, but the animals are also more likely to live in patches of land, isolated from others by roads, cities and farmland.

To help address the issue of habitat fragmentation, wildlife corridors are increasingly being built across the world. Wildlife corridors can be found in countries such as India, Nepal, Canada and Germany. The United States is home to multiple wildlife corridors including over 40 structures, both overpasses and underpasses, along Highway 93 in Montana. Just this week, a section of a wildlife corridor in Seattle opened up and deer have already been seen using it despite the fact that the crossing isn’t even fully constructed yet.

U.S Representative Don Beyer hopes to see more wildlife corridors across the United States. He introduced the Wildlife Corridors Conservation Act in 2016, which would establish a national system of corridors to help diminish the effects of habitat loss and fragmentation. While the bill is not currently being considered this session, The Wildlands Network states that they anticipate the bill will be reintroduced this year.

A system of wildlife corridors could be hugely beneficial for wildlife, especially for species with a large range such as bears, mountain lions and panthers. Stories about mountain lions getting hit by cars in California routinely make the news. Even the cougar known as P-32 who become famous for navigating Los Angeles’ busy freeway system eventually was struck and killed by a car.

Wildlife corridors have already proven successful in the U.S. People’s Way Partnership, an organization who builds awareness and support for wildlife corridors along U.S. Highway 93 in Montana, has been researching the corridors for 14 years. The organization states on their website, “We can definitively state that US 93 North crossing measures have reduced wildlife-vehicle collisions and maintained or improved habitat connectivity for deer and black bear.”

Additionally, a meta-analysis on the effectiveness of wildlife corridors analyzed 78 experiments and found that 60 experiments showed positive results and overall, the corridors increased movement between patches of habitat by 50 percent.

Wildlife corridors alone will not prevent continued population declines. While we work to creatively mitigate the effects of our expanding world, we also need to protect pristine habitat areas for wildlife.