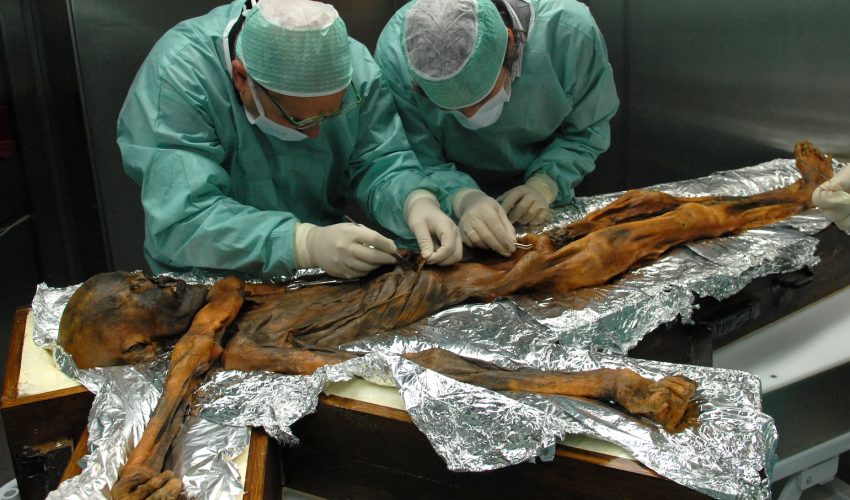 In 1991, the oldest naturally-preserved ice mummy was discovered by German tourists in the Eastern Italian Alps. The first analysis of the ancient human’s stomach has revealed that the mummy, known as the Iceman, ate a final meal that was loaded with fat.

The research is providing rare insight into the dietary habits of European individuals more than 5,000 years ago during the Copper Age. The findings also offer a glimpse into how our ancient ancestors may have prepared food.

Study lead author Frank Maixner is an expert at the Eurac Research Institute for Mummy Studies in Bolzano, Italy.

“By using a complementary multi-omics approach combined with microscopy, we reconstructed the Iceman’s last meal, showing that he has had a remarkably high proportion of fat in his diet, supplemented with wild meat from ibex and red deer, cereals from einkorn, and with traces of toxic bracken,” said Maixner.

The researchers explained that the investigation had not been conducted sooner because scientists were initially unable to identify the Iceman’s stomach, which had shifted upward during the mummification process.

Maixner said that the material found in the stomach was compared to extraordinarily well-preserved samples from the lower intestine. He also explained that the stomach “contained large amounts of unique biomolecules such as lipids, which opened new methodological opportunities to address our questions about Otzi’s diet.”

Using both modern molecular approaches and classic microscopic methods, the researchers set out to determine the exact composition of the Iceman’s diet before his death.

The experts identified ibex adipose tissue, which made up about half of the stomach contents, as the most likely fat source. Although this level of fat content was not expected, the researchers said it makes perfect sense considering the extreme environment that the Iceman lived in.

“The high and cold environment is particularly challenging for the human physiology and requires optimal nutrient supply to avoid rapid starvation and energy loss,” explained study co-author Albert Zink. “The Iceman seemed to have been fully aware that fat represents an excellent energy source.”

According to the study, the wild meat had either been eaten fresh or dried out. The presence of toxic bracken particles from fern plants is difficult to understand, but the scientists believe it is possible that the iceman could have suffered intestinal problems from parasites and ate the bracken as treatment. The fern leaves could have also been used to the wrap food before it was eaten.

Next, the researchers will use traces of the gut bacterial community present in the Iceman’s intestinal contents to reconstruct the ancient gut microbiomes of these other mummified remains.