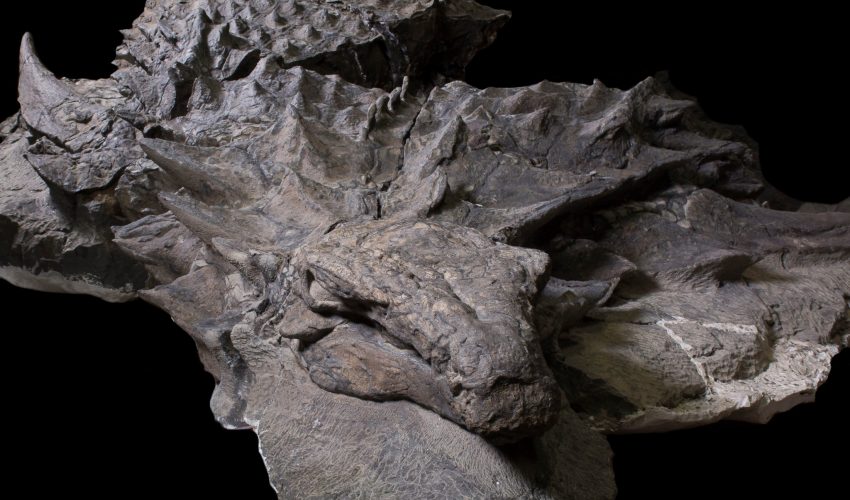 A well-preserved fossil of a newly discovered genus and species of armored dinosaur is now on display at the Royal Tyrrell Museum in Alberta, Canada.

The Nodosaur fossil is the best preserved armored dinosaur in the world, and includes complete skin and armour from the snout to the hips.

“It is so well preserved that most of the skeleton is covered up and cannot be seen due to the amount of fossilized skin,” the museum said.

It was discovered by a worker in the Suncor Millennium Mine in March 2011 and at 110 million years old, is the oldest dinosaur ever found in Alberta.

It took over 7,000 hours to prepare the specimen for research and display.

“It’s basically a dinosaur mummy — it really is exceptional,” Don Brinkman, Director of Preservation and Research at the museum told the New York Times.

Under Alberta law, all fossils are the property of the province, not of the owners of the land where they are found, the Times said. Most are discovered after being exposed by erosion, but mining has also proved a boon to paleontologists, the story added.

It is not known how the animal, a land-dwelling, plant-eating nodosaur, died, but somehow its body ended up at the bottom of an ancient sea, the Times reported. Minerals kept the remains remarkably intact, gradually turning the body into a fossil. And when it was unearthed in 2011, scientists quickly realized that it was the best-preserved specimen of its kind.

The museum was careful not to inhibit industrial activity when retrieving fossils so that excavators weren’t afraid to call when they found something, Brinkman said. “These are specimens that would never be recovered otherwise. We get two or three significant specimens each year.”